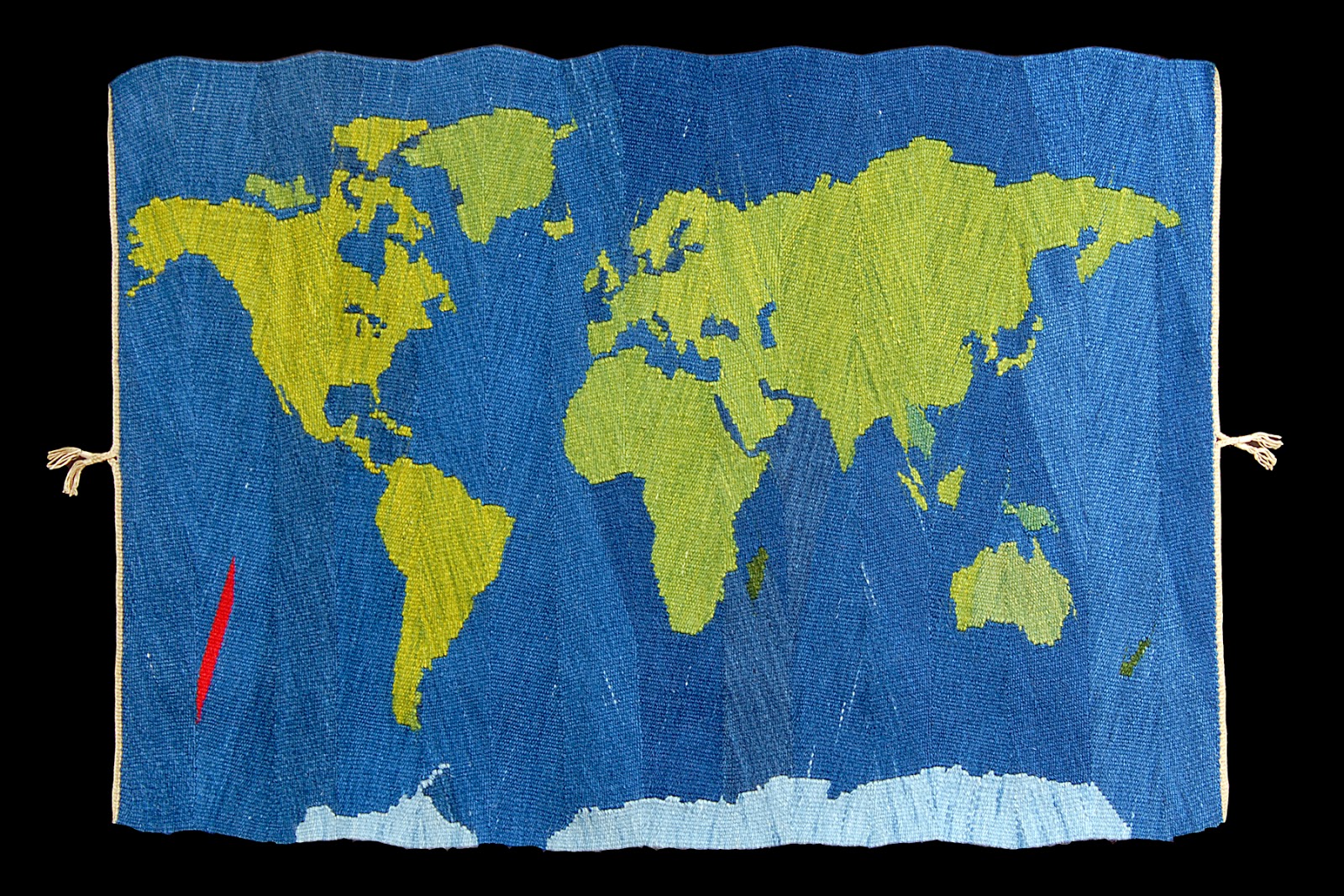 Connie Lippert is another of my wonderful longtime friends who lives here in Clemson, SC.  I've know Connie for many years when we met through a group called Piedmont Handweavers Guild which was a very active and diverse group of artists and craftsmen.  Over time many members of the group (myself included) moved away from weaving but Connie had found her passion and has continued working with weaving, specifically wedge weaving, as her medium and is building a solid reputation in her field.

How did you become interested in weaving and how did you begin focusing on wedge weaving?

I enjoyed many textile activities as I was growing up – sewing, knitting, crochet, embroidery.  I had never been exposed to weaving or seen anyone weaving or given it any thought.  During my first year of college in Florida, a friend mentioned that she wished she could learn to weave.  I only attended the Florida school for one year and when I returned, it was to Auburn University in Alabama, which was also my hometown.  I visited the Home Economics department where weaving was taught and saw the big room full of looms and was immediately smitten.  Even though I was an art major, I took all the available weaving courses (3) as electives in the Home Economics department.

Back in the early 90’s when we were both (you and I, Terry) in the Piedmont Handweaver’s Guild, at one of the meetings I saw a slide of a wedge weave piece and I knew that was something I wanted to learn.  I already was a weft faced weaver and wedge weave was another form of weft faced weaving.  At the time, I could not find any information on the technique or how it was done.  In 1998, Martha Stanley taught a week long rug weaving workshop at Arrowmont in Tennesee.  I knew she would devote half a day to wedge weaving, so I was determined to go. 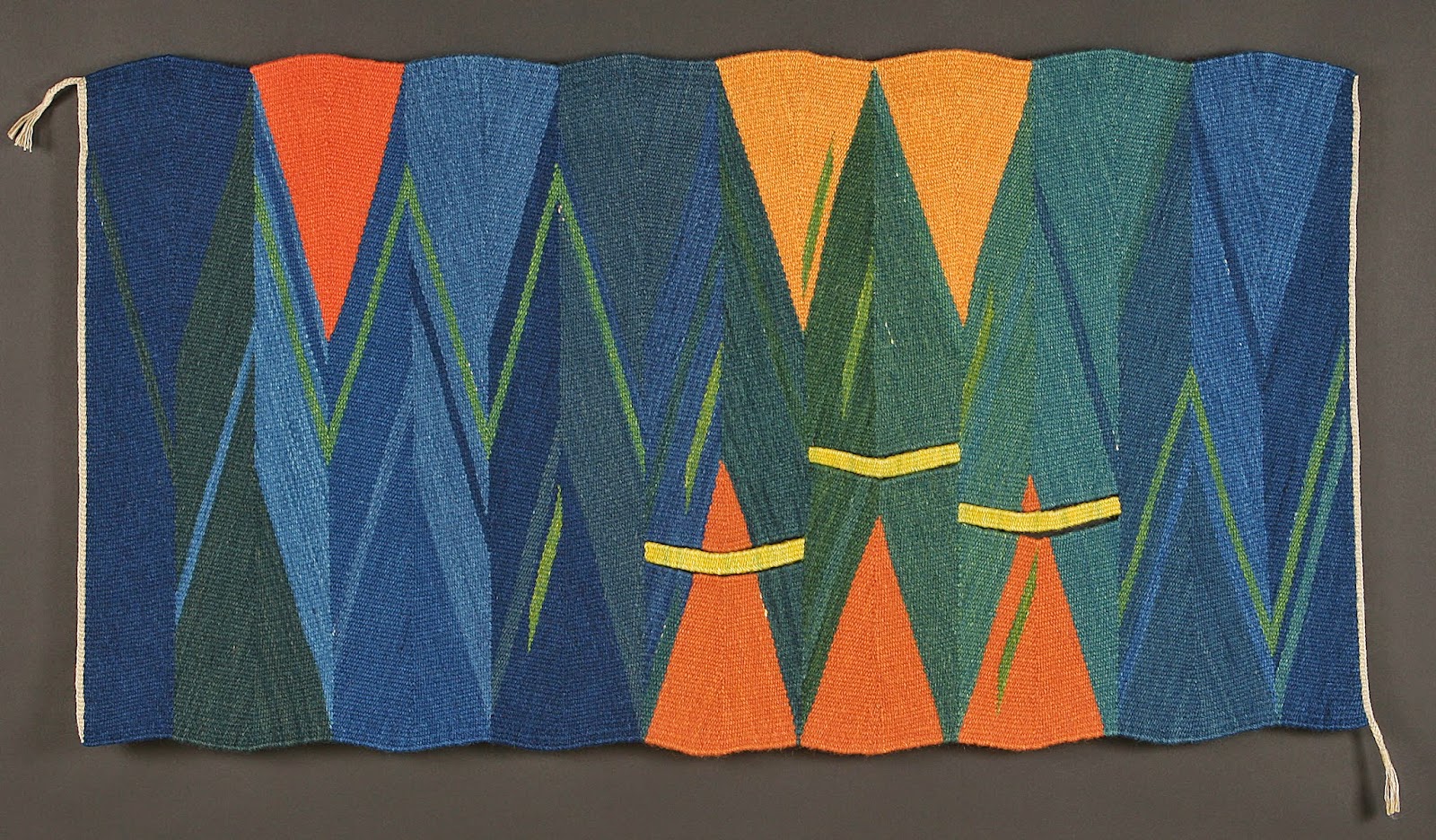 Tell us about the joys and challenges of being weaver.

The joy of weaving in the beginning was all the variety and possibility.  I determined early that I wanted to concentrate on weft faced weaving.  The main satisfaction comes from being able to have an idea which you can bring into being and how the more you weave, the more the ideas flow.   Recognition of your work is a great joy.  Whereas the main challenge is periods where recognition is lacking.  Also having enough time to devote to your craft has always been a challenge for me.

Tell us something about the technique of wedge weaving.

Wedge weave is unique in the weaving world because it is woven on the diagonal as opposed to the horizontal plane in which most weaving is done.  The diagonal pressure on the warps causes the edges to push out or scallop.  To weave on the horizontal, a triangle is built up in the corner of the warp to a certain height and then the weaving continues on the angle produced by the triangle. 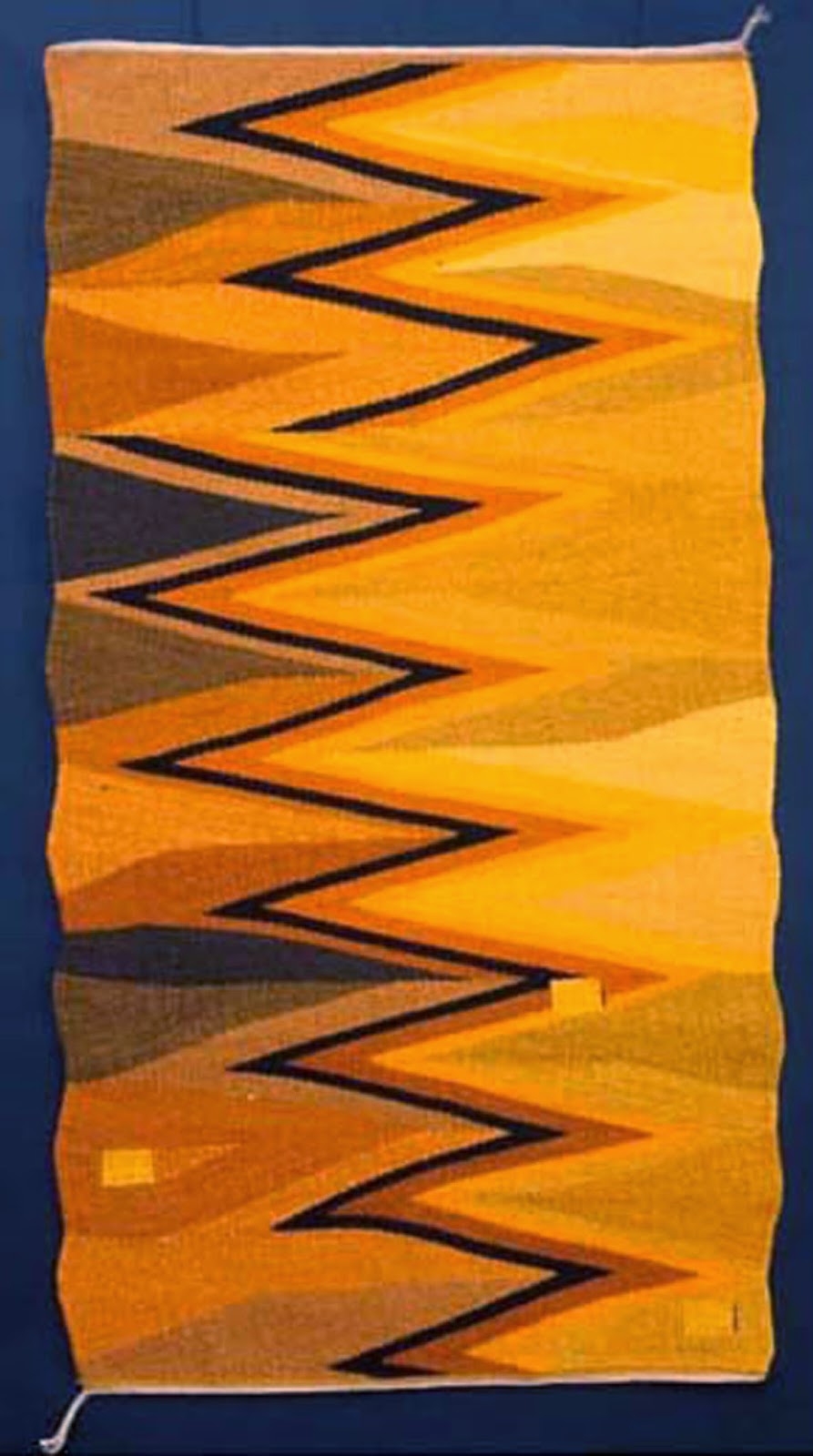 Do you design work before you begin the process or develop the work as you weave?

I have a rough sketch of my weaving before I begin.  It usually has the main elements of the design as distinguished from the background – lines, arrows, etc.  These sketches I keep in a notebook along with sketches I haven’t done that I may draw from in the future. 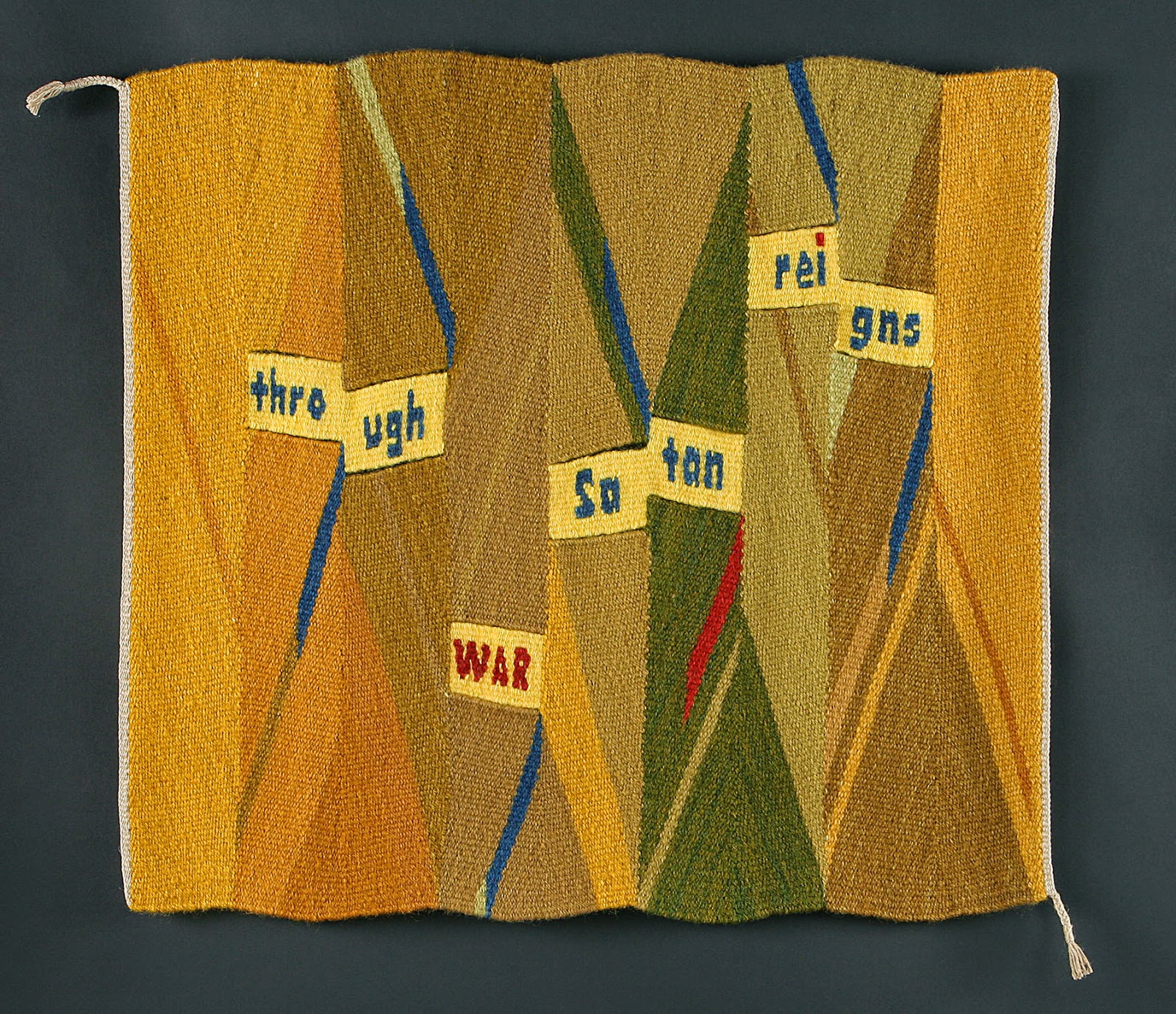 What, if any, design elements might I see in your work and in "traditional" fabrics made by the Navajo Indians who you credit with the development of this weaving structure?

Most of the traditional Navajo weavings I have seen capitalize on the ability to use wedge weave to make zig zag lines.  Zig Zag lines are very common in Navajo weaving and most are not done using wedge weave.  Wedge weave is a much faster way to make zig zag lines.  The unique scalloped edge, which I love about wedge weave, is probably what doomed it with the Navajo – as it was not practiced for them by very long.  It is usually seen in work from about 1870 to 1890.  Weavers and merchants wanted straight edges and the measure of good weaving was straight edges, so the undulating edge just didn’t cut it.

My earlier work had more zig zag lines reminiscent of Navajo work.  As my design ideas have developed, I have used them less. 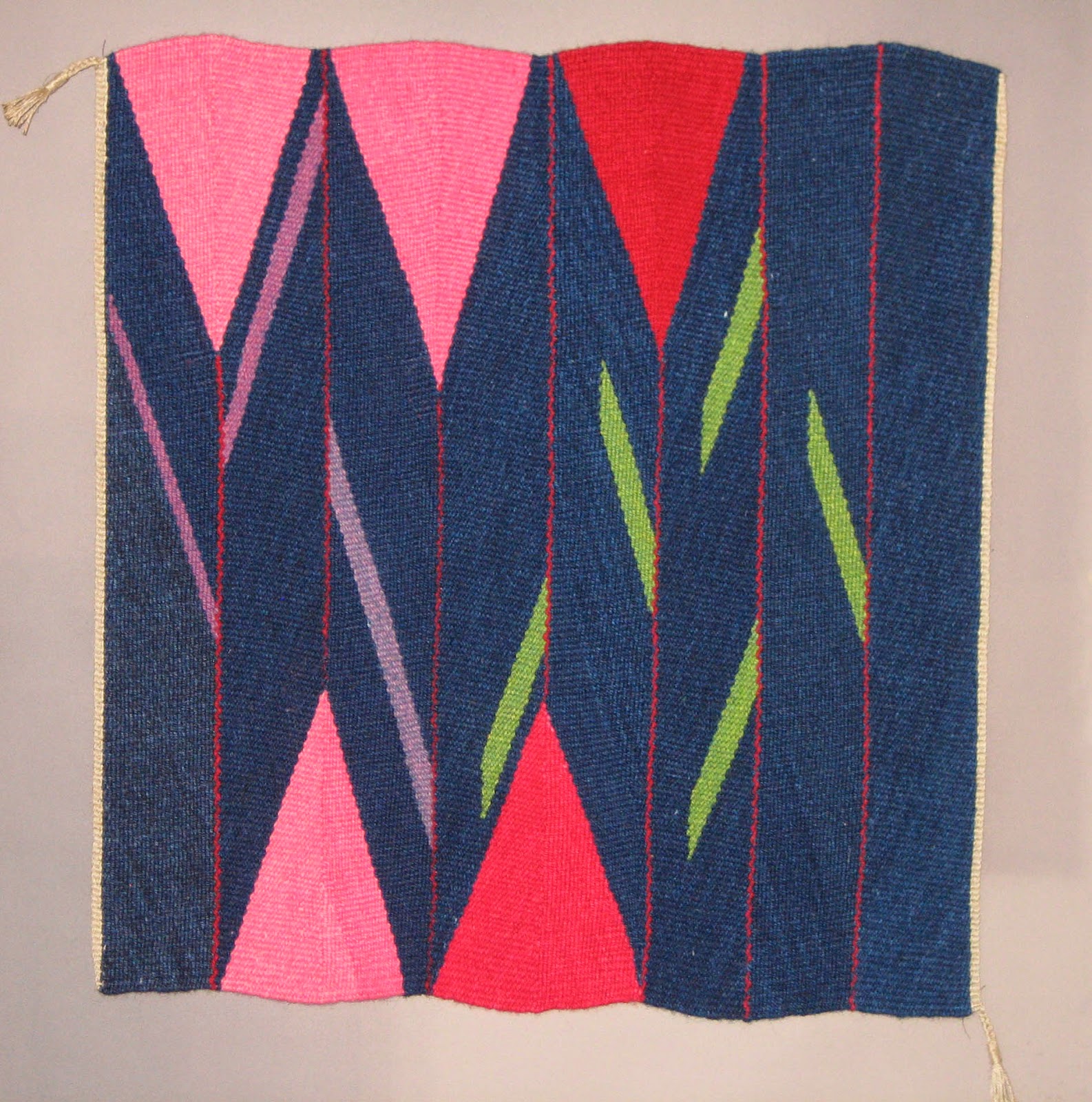 Ghigau - Connie Lippert
25" x 24"
Ghigau is new or just off the loom as noted by Connie.

What might you have introduced into your work that would not be considered traditional?

Since I limit the use of zig zag lines, my work does not have much connection to the original Navajo work in terms of design.  The weaving technique is the same.  Occasionally, I have introduced areas of plain weave into the wedge weave, but I have seen this in Navajo weaving also.

I noticed one very different piece on your website.  The map of the world.  How did that come about? Have you done other works that are more image oriented in wedge weave?

I have done a few pieces with other tapestry elements.  A couple of these, I have felt compelled to make based on my strong feelings about contemporary matters.  Paradise Lost? is one of these pieces that expresses my environmental concerns.  Initially, I had planned to make it to enter into a “green” exhibit at the Textile Museum in Washington, DC.  As happens a little too often, I did not make that deadline, but was determined to make the piece none the less.  It was a challenging work for me because of all the angles I was working with and it took me many months to complete it.  Another piece I felt compelled to make was “Through War Satan Reigns”.  It has other tapestry elements in the construction of the words.

What are the important aspects for you in dyeing with natural dyes?

While I was taking weaving in college, I also did an independent study with a group of weaving students on natural dyes.  I didn’t return to it until about 2000.  After I had been experimenting with wedge weave for a while, I decided I wanted to weave them with natural dyed yarns.  For me, the natural dyes have a lively quality that commercially dyed yarns lack. I enjoy very much the gathering, growing and processing of the natural materials.  I like the experimentation of mixing and overdyeing to achieve a wide range of colors.  Often the colors are the basis for a weaving before I have the design. 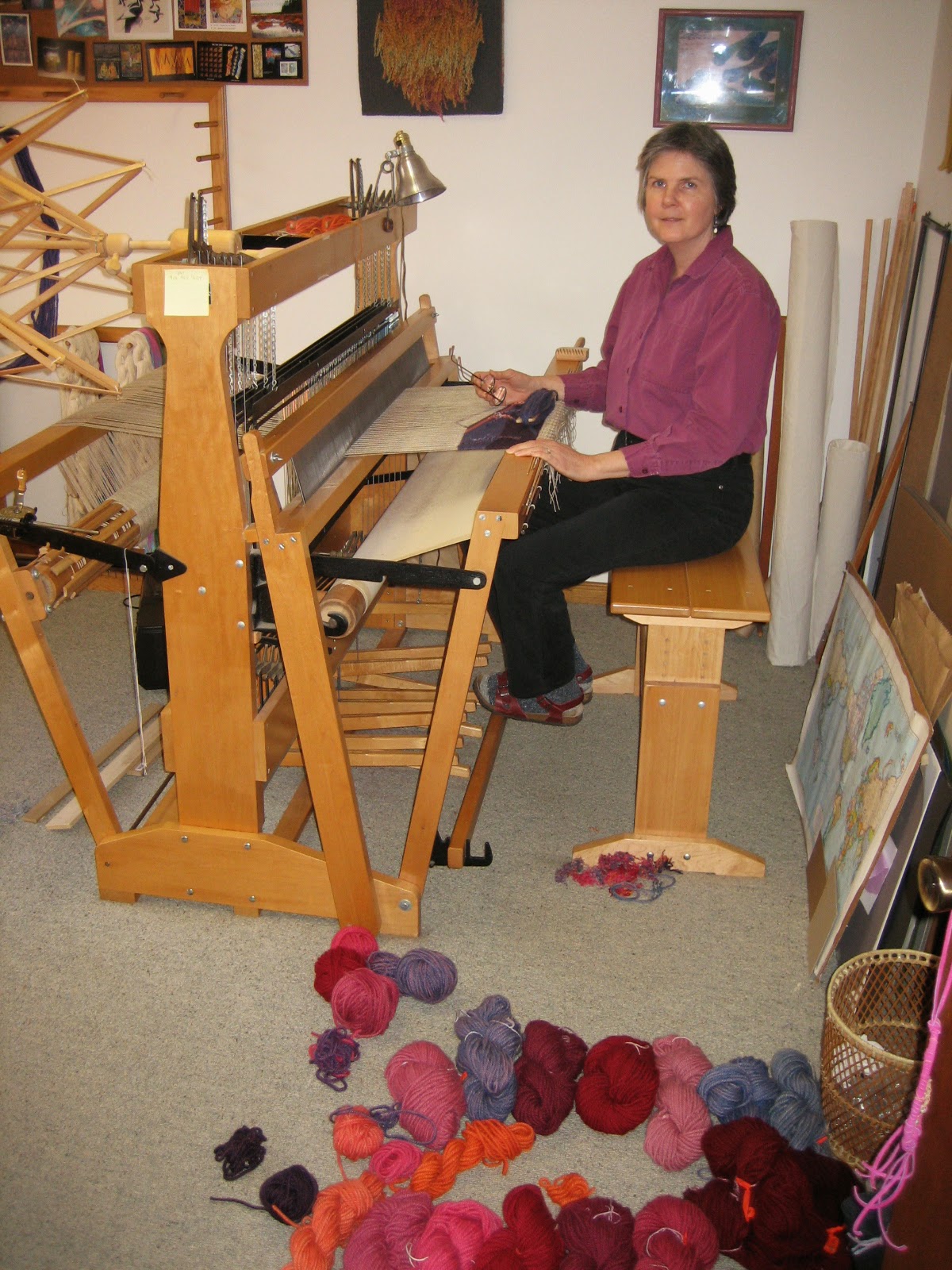 Connie in her studio

What is the most exciting professional experience you have had to date?

I have had many wonderful experiences and feel very fortunate in all the good things that have come my way.  Probably the best was a call from Carol Sauvion.  She produces the Craft in America series on PBS.  She called to invite me to exhibit in her gallery, Freehand, in Los Angeles and in particular to participate in a special exhibit “Looming Election: Woven Works” held at the Craft in America Study Center.  I was in this exhibit with Tanya Aguiñiga, Michael F. Rohde, Cameron Taylor-Brown, and Consuelo Jimenez Underwood. In addition, I was able to give an artist’s presentation in conjunction with the exhibit which was a wonderful experience and Craft in America purchased Paradise Lost? from the exhibit.

Thank you for spending time at
Studio 24-7!
Commenting is Free and
I always love hearing from you.
Posted by Terry Jarrard-Dimond at 7:00 AM