Santa With A Gun Is Not A New Concept 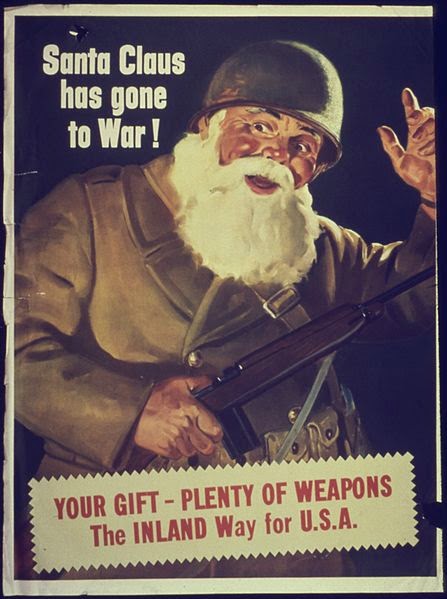 A poster from the Office for Emergency Management, War Production Board, circa. 1942 - See more at: http://publicdomainreview.org/collections/a-pictorial-history-of-santa-claus/#sthash.9ijoo2j6.dpuf

This week I saw a news report about a billboard out west somewhere featuring Santa hold an assault rifle.  The business which sponsored the ad said it was a positive image as Santa didn't have his finger on the trigger.  Give me a break.  Why can't people leave somethings alone and let us have a moments rest from all the violence in the world.

This morning I was looking for an image to feature here for the week and found a sight that has an interesting history of how Santa Clause has "evolved".  The images are in the public domain and there I found the one I've posted here.  It reads, "In the U.S. Second World War poster below Santa takes a radical departure from the jolly red suit and dons the dour shades of war. - See more at: http://publicdomainreview.org/collections/a-pictorial-history-of-santa-claus/#sthash.9ijoo2j6.dpuf".  I guess the billboard wasn't so unique after all.

I'd like to say that I find the idea of an "armed" santa offensive.  I prefer the idea of the jolly ole elf puffing his pipe (with tobacco) giving toys to good little boys and girls not being used for propaganda of a government agency or a commercial business.  There is nothing wrong with enjoying a fair tale even if for a little while.

Merry Christmas to you all and my all your holiday dreams come true.

Posted by Terry Jarrard-Dimond at 11:21 AM

Email ThisBlogThis!Share to TwitterShare to FacebookShare to Pinterest
Labels: Santa