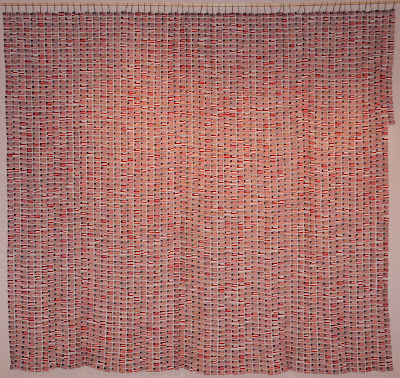 Quilt National 2009 opened May 22 and Kathy Loomis of Louisville, Ky. was awarded the coveted Quilts Japan Prize during the opening ceremonies for her work Postage 3: Memorial Day. QN is one of the most prestigious competitive quilt exhibitions in the world and the Quilts Japan Prize is the jewel of awards. This award is sponsored by the Nihon Vogue Corporation and granted to an American artist as an expression of gratitude for the teaching and guidance that American quilters have given to Japanese quilters. 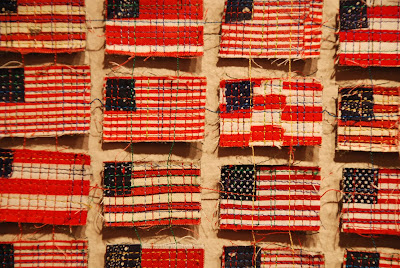 I met Kathy several years ago during a workshop at Nancy Crow's Barn in Baltimore, Ohio. She was working on her Alphabet series and I ask about one of the techniques she was using. The teacher in Kathy sprang into action and she did a little demo to show me how it was done. That little demo is now framed and hanging in my studio and Kathy and I are great friends.

Kathy lives and works in Louisville where she is very active with the Louisville Area Fiber and Textile Arts group and the River City Fiber Artists. The RCFA are the originators of the Form Not Function exhibition which is becoming a well known and respected competitive show held each year at the Carnegie Center for Art and History in New Albany, In.


Question: What was the conceptual origin of Postage 3: Memorial Day?

Kathy: I have been making political art since 9/11. First I made quilts about the World Trade Center. My employer had offices in both towers and when I went to New York I frequently worked in the South Tower. All my friends walked down from the disaster safely but 300 people from a sister company lost their lives in the North Tower. I was deeply moved not only by the loss of life but the loss of buildings that I had so loved to look at and look out from. My quilts were meditations on my memories of the Towers.

As we started to talk about war in Iraq I began to make quilts about the faulty reasoning that led us to that decision. Later I made a long series called "War Zone" that reflected on battle-scarred landscapes. I used the accidental markings on discharged, hand-dyed and rusted fabrics to convey the damages of war.

As the U.S. death toll mounted I made a close reproduction of the famous antique "Kentucky Graveyard Quilt." That quilt, made in 1843, showed a graveyard in the center of a field of Lemoyne Stars, with coffins inscribed with the names of dead relatives of the maker. My quilt - "Kentucky Graveyard (Iraq)" - had flag-covered coffins inscribed with the names of all the military dead from Kentucky through 9/11/07, the date I finished the quilt.

"Memorial Day" was a logical follow-up, as the war and the dying continued. On 5/26/08 - Memorial Day a year ago - the U.S. military death roll was 4,083. I thought about all those flag-covered coffins and realized they would work well in the "Postage" format (referring to size and shape of individual pieces), which I had already used for non-political quilts. Making it was a terribly emotional experience and I shed more than a few tears as I stitched. This may be hubris, but before I sewed a single stitch on this quilt I knew it was going to be special. I was thrilled, but not the least bit surprised, to learn that it got into Quilt National.

In addition to these overly war-related quilts, I think that almost everything else I made in the last three years has in some way been political. I have three closely related series of work going right now that are based on the idea that things are falling apart - things we cannot control (like weather and natural disaster) and things we have allowed to get out of control (like wiretapping and torture). One of these series is called "Crazed," named for the surface of old china, which it resembles, but also referencing how stupidly we have behaved as a society. Another is called "Fault Lines," referring to the seismic activity and how the "solid" earth shifts underfoot, literally and figuratively. A third is called "Crossroads," resembling city grids but also hinting at hard decisions facing us. 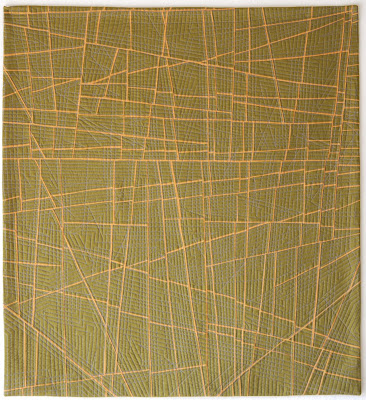 Question: I am interested in the construction of Postage 3:Memorial Day. How did that develop?

Kathy: I can tell you practically to the day when it developed!! In 2007 I was taking a two-week workshop at the Nancy Crow Barn and as we all sat and pieced, we talked about using "sew-off squares" at the end of seams. When you get to the end of a seam, and you don't have another seam to immediately sew onto , you should sew off onto a small postage-stamp-sized piece of scrap before you cut your threads. This saves thread and, more important, prevents the maddening, time-wasting frustration of your thread end being too short and your needle coming unthreaded when you start sewing on a new piece.

Lisa Call was the person advocating for the universal use of sew-off squares. Barbara Bugliani and I were the listeners who vowed to use sew-off squares forever. Within a day Barbara and I both realized that it would be more interesting in our sew-off squares had little designs on them, so we would place really tiny scraps onto the squares and catch them under the sew-off stitching.

Subsequently, Barbara went one way with her sew-offs, making them into lacy scarves. I went another way, assembling hundreds or thousands of them into really large compositions. I made two smaller quilts, containing 1300 and 1800 "stamps," for a show in Louisville in 2008; the theme of that show was the river and the two quilts were sort of landscapes. "Memorial Day" was the same concept, just shifted back to my political/war arena. Yes, the flags in this quilt, with their raveling edges and hanging thread ends, are kind of messy and frayed around the edges, but I suggest that so is our national soul as a result of the Iraq war. 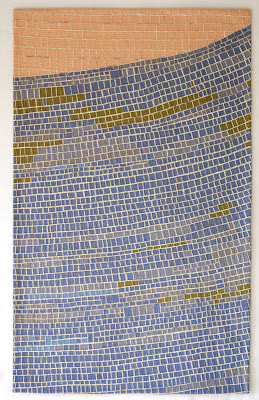 Question: I know you have traveled a good deal as well as lived abroad. How have those experiences influenced your artwork?

Kathy: Yes, we lived in Germany for three years in the 1970s and my husband and I are both travel junkies. We've been to every continent except Africa and Antarctica and particularly enjoy getting there via cargo ship rather than airplane. I can't think of any way that these experiences have influenced my work in the visual sense, since my art is far more abstract and conceptual than representational. The only times I have used even vaguely representational approaches - the War Zone quilts - have been referring to places I have never been.

However, I do think that spending a lot of time abroad has influenced my politics and thus, perhaps, influenced my work. Being outside your native country expands your worldview and thus makes it harder to see only one side of the issue. I think all of my work reflects ambivalence, complexity, subtlety , the difficulty of categorizing things into "right" and "wrong." 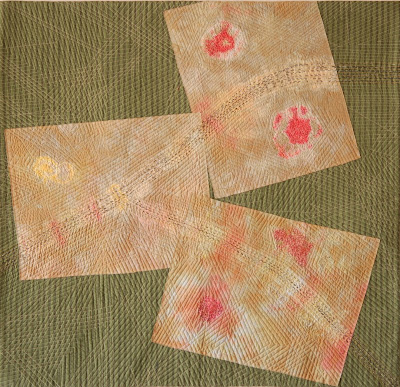 Question: Do you have any art heroes?

Kathy: Nancy Crow is my sensei (my son, who studies martial arts, told me years ago this was the perfect worked to describe one who has immense influence over you and whose approval you battle to earn and maintain). I have studied with her since 2003 and learned far more from her than I can recount. And I love her work, of course. 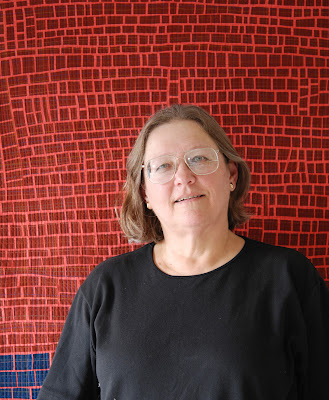 
Congratulations on this wonderful achievement and recognitions. Enjoy your trip and we will look forward to a full report.

Please check out the link to Ellsworth Kelly and see his "quilt".
Posted by Terry Jarrard-Dimond at 8:16 AM