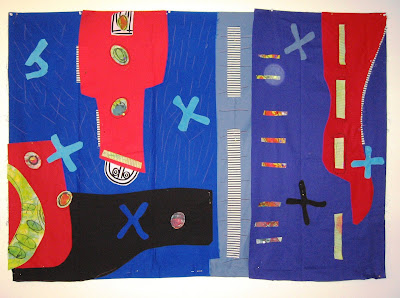 COMPOSITIONAL CONVERSATION is back from a 'week off' and what a fun return! Gayle Vickery Pritchard is our artist this week and she, like several of our previous artists, has really put herself into this project. Now how in the world did she do it? Read on and find out. 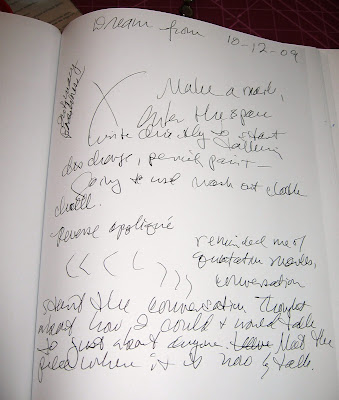 Although I received the package a week ago, knowing I wasn't going to work on it until this week, I refrained from opening the quilt to look at it. I didn't want to start thinking about it until I was ready to work on it. I did clear space on one wall of my small studio to create a mental workplace. I also printed out the eight stages to date on Sunday to look at the choices people had made, study the orientation, and think about what I liked and didn't like about each stage.

After looking at the pictures of the various stages, my trusty inner voice came into play. Last night I dreamed about the work, and woke up to make notes in my journal. (See photo). As a life long journal keeper, I think when I am problem-solving, it continues into my sleep state, as I often wake up with fresh ideas and solutions. That is what happened to me last night, so I went with it, as I have learned to trust this part of myself over the years.

I still had one errand to do this morning before I could begin working, so once again, I refrained from hanging the quilt on my work wall. All the way to the post office, my mind began the conversation started in my sleep. Like many of the artists in this process, I thought I might begin by dismantling or playing around with the composition, trying this and that, gradually putting it back together. When I got home, I hung the piece up, having already decided that I needed to begin working on it as I would any of my own pieces. As I wrote in my journal, I was going to "meet the piece where it is now and talk." This is what I proceeded to do.

I liked the horizontal orientation, and hung it that way on my wall. As I do in my own work, I grabbed a marking tool, and began making marks. I had thought about doing some discharge, but the tests I did on the background fabrics gave questionable results. 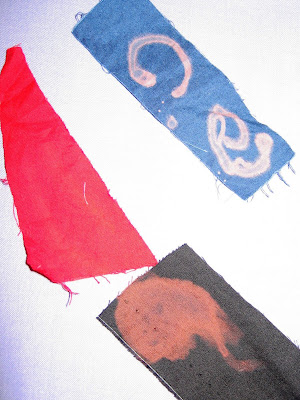 Marking on my work allows me to vent my pent-up feelings of anticipation as I begin work, and to "enter" the piece to work. I generally begin my own work this way, even though the marks and the narrative text often end up hidden in the final composition.

Although I liked the color, especially the new blue, I felt the vertical yellow area with the black strip beside it in the previous incarnation of the piece broke the piece into two distinct pieces. I also felt the yellow area was too wide, so in the end, I just removed it, and everything that was attached to it. This left the previous grayed-out blue background fabric that had been covered with the brighter blue. I decided just to work with it, and focus on integrating the right side with the left side. I drew over some of my previous marks with a black fabric pen, but did not heat set it, so those marks, too, would be removable. 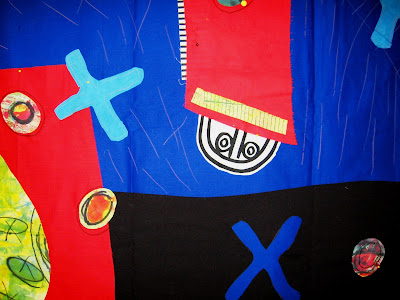 This detail shows some of the marks made by Gayle.

After moving the printed fabric shapes around, and cutting some of the scraps into more oval shapes, I cut out the shapes I had dreamed about, quasi-"X" shapes with soft corners that reminded me of some of the shapes of the reverse appliqued African kuba cloths I have around my house. I allowed extra seam allowances on the edges, so they are cut a bit larger than they would be finished. I added these because I really wanted some more already-placed geometric shapes, and cut through some of the fabrics to create more "X" shapes for reverse applique.

Finally, I added some black and white commercial fabrics to direct the eye and create more of a focal point in the piece. Had I had more of the hand manipulated fabric that had previously been cut into the boomerang shape, I would have cut more of the oval shapes, but there wasn't any more, so I didn't. I added some more black fabric pen markings around those, as well, which I also did not heat set. 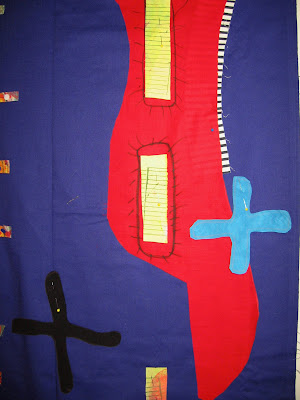 When starting a piece, my process is often to mark the piece, enter the space, and interact with the surface. Compositional Conversations was no different. My only thought was whether to make my marks removable or permanent. Since my own work is collage, I never worry about what is underneath anything else. If I don't like it somehow, I can cover it up later, but it will still be a part of the piece. I don't agonize over my own work, I just do it, place something, respond, keep working in the moment.

The biggest challenge for me was working with all solid fabrics cut into geometric shapes. Beautiful as they are, my own work is always about something, usually my expression of very tangible events in my life. It was fun responding to the beauty of the colors as they talked with each other on my wall. Although I admit to some trepidation about how others might respond to my removed pieces, marks on the surface and cut holes, I decided in the end that working in my own voice was the only honest way to approach this piece.


Thank you Gayle for an interesting commentary and insight into a way of working I am not familiar with. 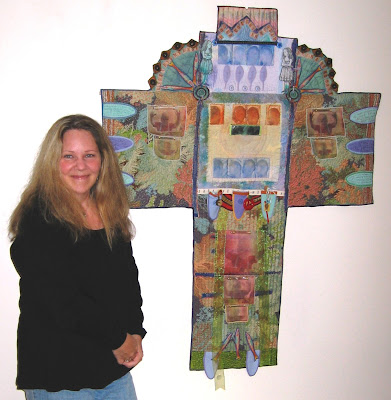 Gayle standing next to I Hear Voices In My Head


Gayle Vickery Pritchard is a well-known fiber artist whose career has spanned some 25 years. In addition, she is an independent curator, lecturer, teacher and publisher writer. Gayle studied art at the College of Wooster, Paul Valery University in France, the Surface Desighn Symposium in Columbus, Ohio, and the Cleveland Institute of Art. Her work has been widely exhibited in galleries and museums across the United States and in Denmark, Japan, and Australia. Highlight exhibitions include the Cleveland Museum of Art, Ohio Designer Craftsmen and Visions, an international fiber exhibition in San Diego. Commissions include the Rock and Roll Hall of Fame Quilt, the Smithsonian Craft Archives, and the opening of the Peter Lewis Building, desined by Frank Gehry, in Cleveland, Ohio. She is featured in the 1997 Encyclopedia of Living Artists, and was named Teacher of the Year finalist by Professional Quilter Magazine. Her work has been widely published, including these books: Quilts of the Ohio Western Reserve (Ricky Clark, Ohio University Press), Crafting Personal Shrines (Carol Owne, Lark Books) and The Art Quilt (Robert Shaw, Hugh Lauter Levin). In addition to numerous magazine articles, Pritchard is the author of the newly released book, Uncommon Threads: Ohio's Art Quilt Revolution (Ohio University Press, December 2006). She is currently completing a second book, a biography of artist Susan Shie of Wooster, Ohio. 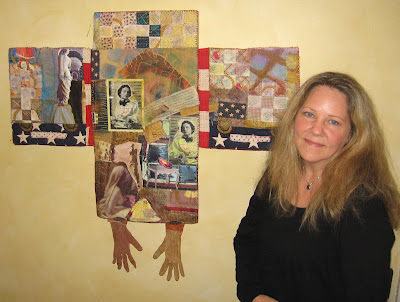 Gayle with For Sadie Jane


We invite you to leave comments for Gayle and the other artists who has contributed to this project.
Posted by Terry Jarrard-Dimond at 4:39 PM