Welcome to Stage 14 of Compositional Conversation. Our artist for this stage is Marina Kamenskaya. Marina is someone I have had the pleasure of working alongside during classes at the Crow Timberframe Barn. She has a beautifully developed style and an equally strong personal vision so let's see what she did with the Compositional Cconversation and what she has to say.

Comments by Marina Kamenskaya
It was not easy to follow the project. As it kept developing, I was getting more and more nervous. It seemed impossible to be able to continue the work someone else began because it was so different from what I do. I am sure everybody felt something similar. What helped me was to remind myself that my task was not to produce my own work of art, but to evaluate the composition that I would receive and try to make it more harmonious.

I loved the strong, powerful shape that Terry had started and I was disappointed when it started getting lost behind all the other elements; or if not getting lost, then becoming "whimsical" and losing its power.

Then came stage 12 and Kathy's dramatic cleansing act, which enabled the next no less dramatic change which Leslie introduced. 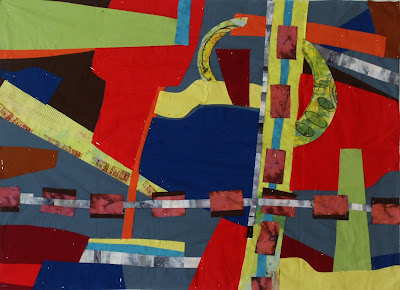 Stage 13 by Leslie Riley turned 180 degrees.
When I received the work from Leslie, I thought it was almost perfect. There was movement, coherence, and rhythm. So I panicked again; at first it looked like I could do nothing without spoiling the composition.

Leslie's notes and pictures came after I had already received the actual work. That's when it turned out that I had placed it the wrong end up. And still I left it my way; the placement of the initial red shape and the way the two criss-crossing shapes divided the space looked better to me with this side up.

After I realized that inadvertently I had already started making changes, it was easier to look at the composition without being too intimidated. 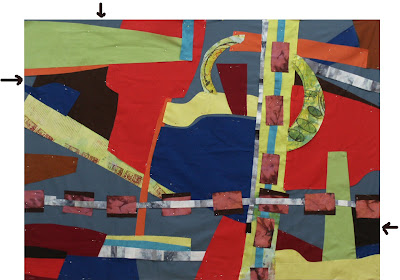 I felt like introducing more grey at the top edge (above) to open the grey background in the upper left corner so that the black that lies under the lime shape looks more like a shape and less like a background. 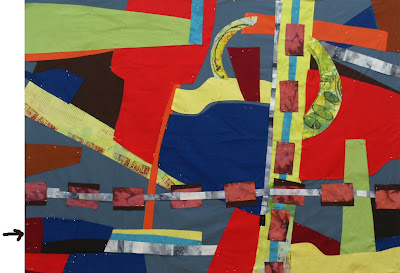 I added a blue shape to continue the horizontal line between the blue shape and the pieced gray strip.(above) 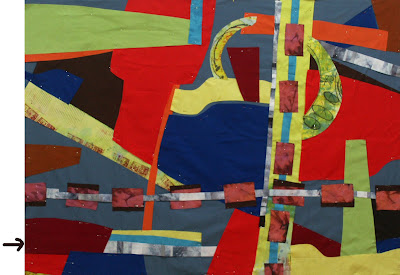 At this point I noticed that I had just started to make my own work and as a result everything else looked wrong now. So I took all those shapes that I had added off the wall...(above photo) 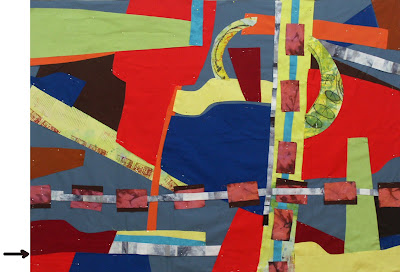 ...but recut the dark brownish-red shape. (above photo) Now it is more in sync with other shapes, and the upper edge of the yellow shape to the right of it continues smoothly. 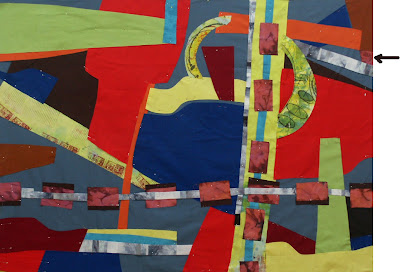 Now my attention went to the upper right corner. (above photo) I added a maroon piece there. I felt that it was necessary that this corner speak to other important elements (rectangles in the criss-crossing stripes). 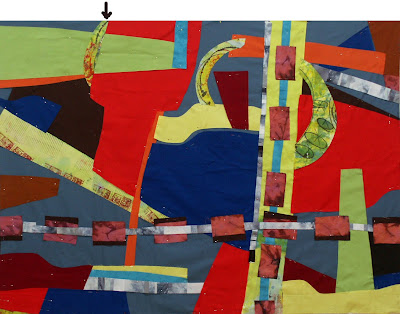 Now I was bothered by the huge lime shape in the upper left. (above photo) It is the only shape of that size that stands on its own and is not broken, but it is not interesting enough and cannot carry the importance that is assigned to it. I did not feel like changing its shape, so I used a leftover hand-dyed piece and put it over the lime shape to break it. 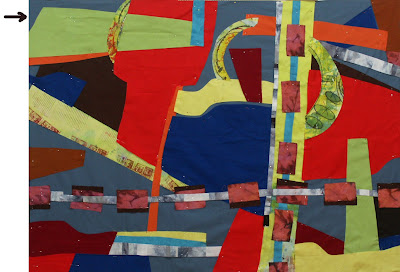 To take even more from the lime shape, I cut off a tiny bit of it on the left. (above photo) If a shape goes off the edge, it looks even bigger than it is, because we tend to imagine that it continues away in space outside of the work. This little cut seems to do the job, now the lime shape does not dominate the whole. 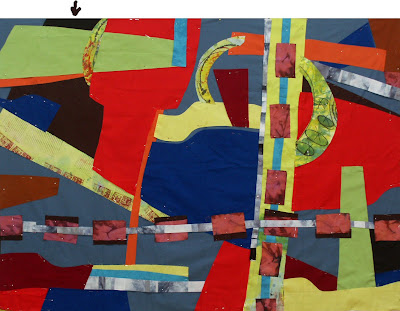 As the last touch I restore some of the black on top of the lime shape. Now the mental eye sees this little piece of black as a part of the much bigger shape hidden behind the line. (above photo)

I still think that the upper right corner is not resolved, but I am out of ideas. I am done.

*****
A big Thank You to Marina for participating in Compositional Conversation and for sharing the following information including images of some beautiful work. Please read on. 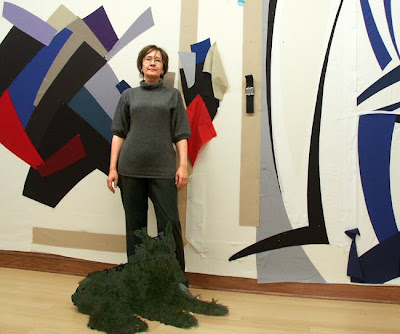 Marina with her work and a friend.

I follow my chosen medium and its innate qualities and possibilities.

Every next work takes on from where the previous one has stopped.

I have my own vision as an artist, but like any artist I cannot make anyone see what I see.

I can only speak with my own voice and let it be heard. 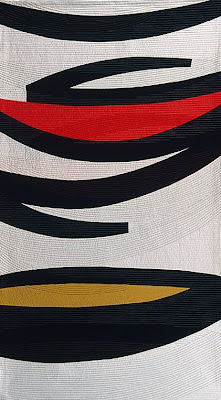 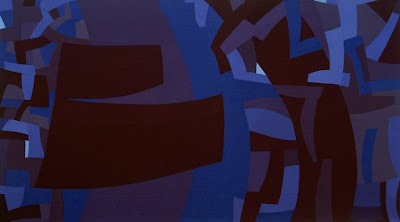 Marina was born in Moscow in a country that no longer exists. Her mother was an architect and father a furniture designer. Art was part of the family life as well as books, museums and concerts. The arts were always in the classical form as the ruling ideology was not supportive of abstract non-representative art.

In 1991, when the country began allowing people to leave, Marina and her husband moved to Chicago with their two daughters for a new beginning. She worked at Northwestern University as a Slavic department assistant.

In 1996 she discovered quiltmaking as a craft and was inspired by Deirdre Amsden to work in the colourwash technique. She was awarded a second place prize in the First Entry category at Paducah in 2003 for a huge colourwash quilt.

Marina says, "I was always interested in crafts, but never dared to make art or think about myself as an artist. The turning point in my life was meeting artist Nancy Crow and taking her classes. It happened in 2003. Nancy influenced my attitude towards myself and art, and she keeps helping me with both criticism and encouragement."

Marina now works as an artist in her chosen medium of textiles. While she has not shown her work widely, she has had work accepted in the annual Form Not Function exhibition at the Carnegie Center for Art and History in New Albany, In and received an honorable mention in 2006 for Opening #5.

The project is now headed back to South Carolina. I'm not sure what if any additions or changes I may make but I will be posting that update very soon.

Posted by Terry Jarrard-Dimond at 4:03 PM