Just when you start to get comfortable with what appears to be the 'final' direction of this project we find that it has taken another interesting turn and is headed for new territory....and guess what? There are still three more artists waiting to have a say.
This weeks' artist is Kathy Loomis.

Comments by Kathy
As several of the previous participants have noted, the quilt I take out of the box could very well be "finished." I had some artists friends over for lunch while the quilt (straight out of the box) was up on the wall and they said "ooh, that's nice!" It has a character of its own, and the separate elements of the composition seem to be consistent with that character.

Unfortunately that character doesn't seem to want to hang out with me. I find myself looking for its bones - the "real life" it tells me it wants to resume. The first couple of steps in its development were quite austere - big, bold shapes in edgy relation to one another. I thought that was interesting and strong. While the color scheme of the quilt has retained that strong, interesting, edgy character through its travels, the composition has successively become more and more detailed and fussy, which I find uncomfortable.

My first step is to take all the fussy bits off the quilt and see what's underneath. 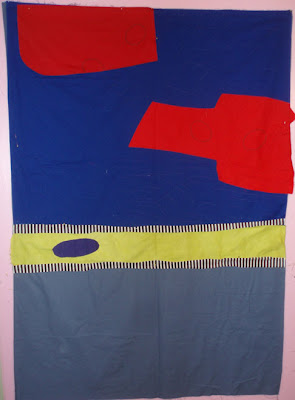 I see strong color and three strong shapes: two curvilinear reds and a lime green stripe or panel. But there doesn't seem to be any tension in their relationship - maybe they're too far apart? Before I can deal with that issue, I find myself distracted by the hole in the green panel. There's enough of the lime green in the bag to recut the panel without a hole, but even better, another piece of the screenprinted green. big enough to go on as a rectangle. In the bag I also find some stripes of gray/black hand dye that had been there in a previous incarnation but were taken off several weeks ago. I put them back up to give a little more weight to the green panel. 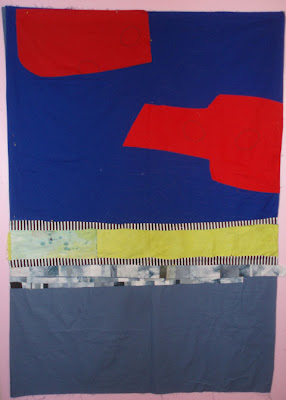 Step Two
Now I wonder whether the proportions of the entire quilt are right. The two red shapes seem to be too small to command their space. Without all those little Xs and bits of printed fabric, there's a lot of empty space on the quilt. I experiment with cropping off the bottom, then cropping off some of the left side. Sure enough, the shapes are forced to talk to one another.


The popsicle-shaped red one has been in that same position since Day 1 of this project (are we afraid to change Terry's shape because it's her project??) and I do nothing to change that. My first approach is to juggle the other one to see if it can find a better place, to get some dialog with the first one. I try several different positions. 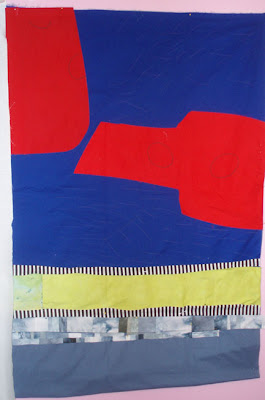 Step Three - Cropped
But wait. When all else fails, read the directions. In moving the piles of stuff around, I come upon the envelope of paperwork and decide to reread the ground rules that I had slid over two months ago. Guess what - we're supposed to keep the size of the quilt at 42" x 60". So much for my cropping. I'll have to achieve the same effect by changing the proportions on the large ground. First is to move the green panel down - it was too close to the center of the compositions, which I think detracts from the real action: the red shapes and how they get along. With the panel closer to the bottom, it acts as a stage for the action.

But on the other hand, this gives me an even larger area for the red shapes to float around in. If I thought they were too loosely packed before, it's even worse now. I decide to re-cut the red shapes. They had been added by different people and the reds aren't exactly the same, yet not different enough to look deliberate. 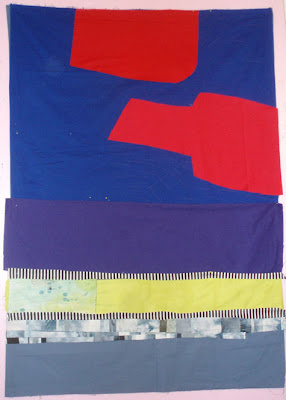 While I'm at it, I add a third red shape. Now the shapes are crowded enough to have some tension. Finally, I find an acid green shape in the pile of discards and put it back on the quilt. I had liked that shape , and it seems to go well with both the pared-down color scheme and the remaining shapes. I experiment with some slight variations on the shapes and decide that rather than cut them to fit, I'll turn under the edges and leave some extra fabric in case Leslie and Marina want to make some tweaks. 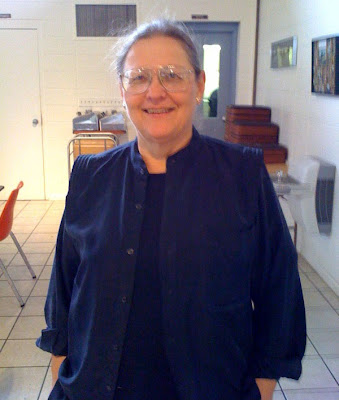 Kathy lives and works in Louisville where she is very active with the Louisville Area Fiber and Textile Arts group and the River City Fiber Artists. The RCFA are the originators of the Form Not Function exhibition which is becoming a well known and respected competitive show held each year at the Carnegie Center for Art and History in New Albany, In. 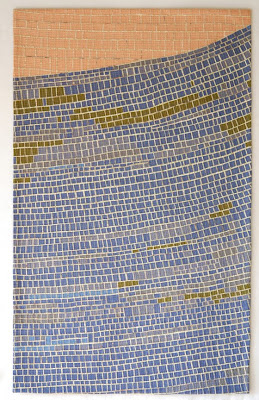 In May of this year, Kathy was awarded the coveted Quilts Japan Prize for her work Postage 3: Memorial Day, during the opening ceremonies of Quilt National 2009. QN is one of the most prestigious competitive quilt exhibitions in the world and the Quilts Japan Prize is the jewel of awards. 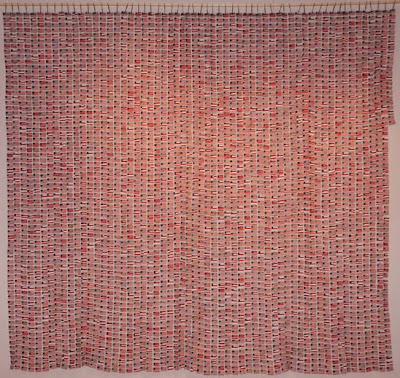 Thank you Kathy for your contribution and commentary. Next the project heads up to Chicago to Leslie Riley. Looking forward to seeing what thoughts Leslie has on the piece.


Thank you for viewing this ongoing project. Terry