A Good Use for Instant Potatoes 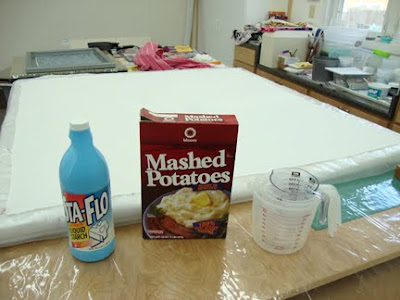 Ingredients for Potato Resist
Liquid Starch - Potato Flakes - Water
Last year I shared my experiment with flour paste resist. It produced beautiful results but I was not satisfied with the consistency of the paste and have not taken time to tinker with the mixture. I wanted something that was easier to spread and would cover a larger surface area without having to make multiple batches.
This week I found a formula for a resist mixture which uses instant potato flakes and liquid starch. I had purchased the ingredients sometime ago but had not tried the technique so I gathered the items pictured above, pinned a large piece of washed muslin to my table and "got things cookin'." 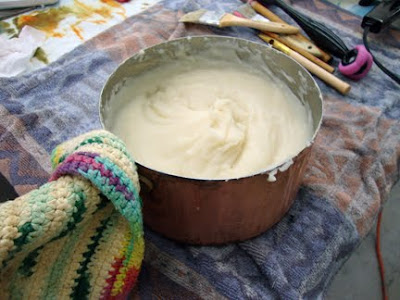 Potato Resist
2 cups water
1 cup instant potato flakes
1 tablespoon liquid starch
I doubled these amounts and used 4 cups water, 2 cups flakes and 2 tablespoons of starch.
Bring water to a boil and add flakes stirring regularly.
Stir and cook for 5 minutes.
Remove from heat and add starch and continue to stir for several minutes until lumps are gone. Stir with a spoon or mixer.
If you want a less stiff mixture, return pot to heat and stir in more water. I added almost 2 additional cups a little at a time and then used a small handheld mixer to really get a smooth consistency.
Allow this to cool before applying. 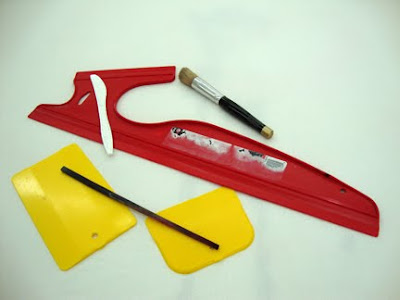 Tools for spreading potato mixture.
Here you can see some of the tools I choose to apply the resist mixture and to make marks into the mixture. There is a chopstick, 2 yellow bondo scrapers, a plastic knife, a stippling brush - tried using the end, and a red edger used when painting around edges of windows and molding. I ended up using the larger yellow bondo scraper. 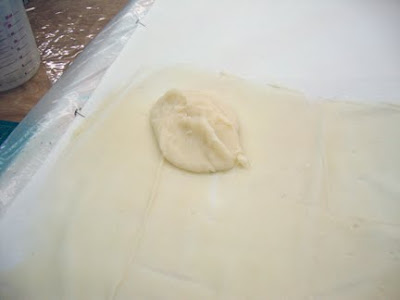 The Blob!
You can see from this image the approximate stiffness of the mixture. It is like nice whipped potatoes.....Steve McQueen would be proud. (Get it? THE BLOB)
With the double batch I was still only able to cover half of the 43" x 43" piece of fabric. I might have been able to spread it more thinly but as the fabric gets wet and heavy it is more difficult to move around without stretching the fabric and creating wrinkles. 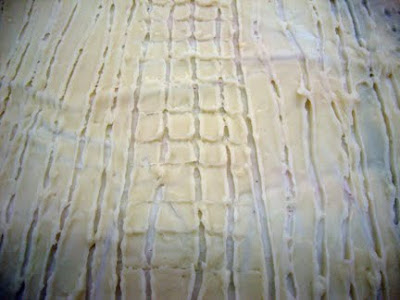 Here you can see two shots of the marks I made on the fabric. The lines were made using the chopstick. 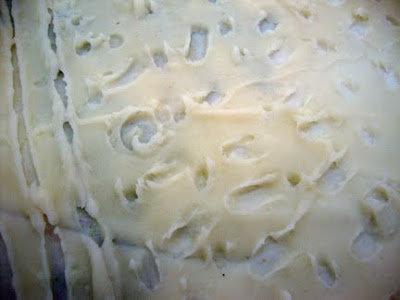 Dots?
These marks were made with the blunt end of the paintbrush. I was attempting to make dots but that did not work. I also made quick strokes with the chopstick that was my attempt at dots and I made some circles with the end of a bamboo brush which is not pictured.
The piece is now drying and I will add dye as soon as the resist is dry. I'll be reporting back with the results.
****For those of you who don't remember THE BLOB, it was a 1950's (1958) monster movie starring Steve McQueen. Those were the days when monsters were sort of funny and rubbery and didn't totally naw anyones head off. What were they thinking? Didn't they know they were monsters? The trailer for the movie said: Beware of the Blob! It creeps, and leaps, and glides across the floor. Big Deal. Where's Freddie?
Thank you for dropping by and spending time with me. If you try this process please let me know.
Posted by Terry Jarrard-Dimond at 4:15 PM