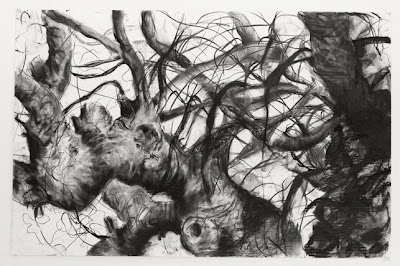 Fig by Day
Charcoal - 26" x 40"
For a number of years I works as a textile designer and one of the artists who worked with me during that time was Angela Oates. Angela, like myself, had earned her MFA from Clemson University. Her focus was printmaking and drawing and I have always enjoyed the explosive energy she releases in her work. Mark making seems to be a topic of great interest to artists in the textile mediums and felt you would enjoy seeing some of Angela's work.
INTERVIEW WITH ANGELA OATES
Terry: At what point in your life did you know at your core you were an artist?
Angela: That question gets asked a lot of artists it seems, and I find it odd to talk about. I don't know that there was ever an epiphany, but I do remember having sense of a distinctive perception about things. I craved my alone time and had lots of imaginary friends. I liked to build things and sit in trees and enjoy the view. It wasn't until the fourth grade when one of my teachers used punish me by taking away my art time that I realized it's importance to me. I knew from the ninth grade that I wanted to pursue study in art. I guess I have always "known" that I was an artist in my core existence because I can't imagine being anything else. I just never thought much about what it's called. 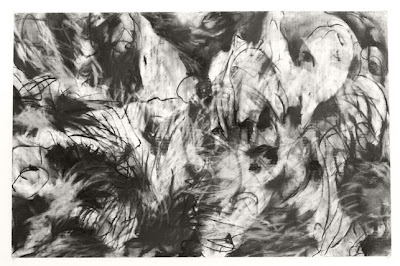 Flight Path
Charcoal - 26" x 40"
Terry: Do you ever get in an artistic slump and if so, how do you rejuvenate yourself?
Angela: I think what "induces" a slump in my work is that comedown from the ultimate high when I know I'm on a roll. Somehow accepting the fact that ups and downs are both part of the terrain, it makes it a tiny bit easier to deal with the downs. Stepping away and doing something different, like walking the dogs or reading sometimes brings me out of a slump. Last year I took one of my shepherds for a late night walk and stopped to look at the moonlit sidewalk...and thus the next body of work. Sometimes just sitting and drawing releases work too. For me, it's not a matter of will power to end a slump before it's time. I just know I have to be with activity and passivity for it to yield to a different rhythm. 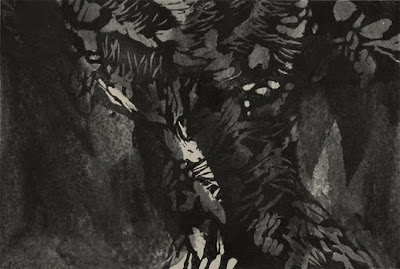 Night Walk
Linocut with Wash - 3 3/8" x 5"
Terry: Please describe your studio activity...your work habit.
Angela: I try to work daily in my studio, but I'm usually not in there for extended periods of time. I'm lucky that my studio time and my work habit kind of match up. I think it's more about movement with the mystical and the physical world than the time piece anyway. My work habit usually includes working in silence and just looking at something. One physical thing I have discovered about work space, is that I need plenty of head room. Funny, I hear that a lot when talking about guitars, but not studios. I like not having a solid ceiling above me, but rather exposed rafters. As far as work habit, I've noticed that if I start my day in the studio, even if for a short while, it sets the tone for the rest of my experiences for the day. Mostly I work in black and white, flat on the wall for drawings and on work tables for my print work. I make a mark, then another, then I start seeing things in the work. It's definitely about having the courage to get lost and not know when or if I will find the other side....It feels fluid and airborne.
If I work through ideas by making marks, I have one type of existence. If I just think about the work and ideas and don't make any commitments in the work, that is a spot I really don't like.
Terry: What are you currently exploring in your work?
Angela: I've been doing some small etchings, a series of changes, on the same plate. Monoprints as I have no interest in more than one of a kind (although there is value in this too) I am intrigued by the residual marks from the plate's last state. I find because I like line so much, and being outside, that there is a kind of landscape things going. Although I don't mean to suggest that my work looks like landscape either! I've been thinking about space in landscapes, physical or emotional. 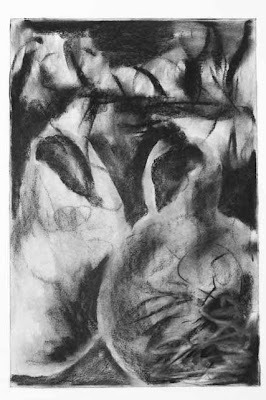 Untitled
Charcoal - 12" x 17.5"
Terry: What role do you feel artists play in society today?
Angela: I think artists have always played an enormously important role in society. We are the fabric. It takes courage to put any kind of mark down and claim it. Artists, I believe, are the keepers of the realm that moves between the invisible and the visible and their visual images have tremendous non verbal influence. They come from a wild and direct place. At this time in society, the fear, intolerance and ignorance are astounding and what artists bring is a bridge to and from the other worlds. It's a precarious, but vital state. Artists who work with a sense of humility are the finest of the seeds. 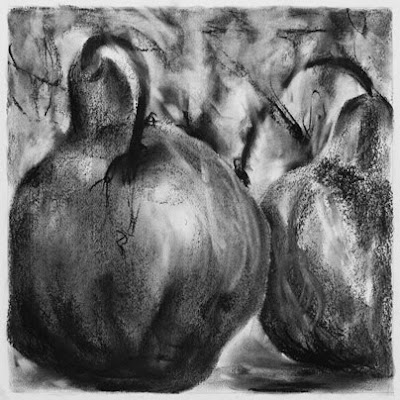 Untitled
Charcoal - 12" x 12"
Terry: When do you know you have made a good piece?
Angela: I know I've made a good piece when I have that "aahhaa" feeling and when I still think it's a good piece after sleeping on it for a day or two. I usually know the entrance point of one piece from the exit point from the previous piece. The pieces are also part of a continuum and it seems like most of the energy is in the first or the last piece along an exploration. The ones in the middle are sometimes more like articulations of the endpoints. (This is not always so, but I have noticed that in my work on several occasions) 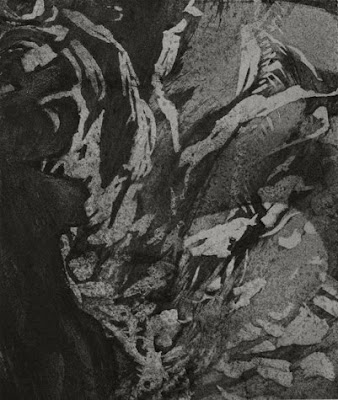 Snail Trail
Linocut with Wash - 2 3/4" x 3 3/8"
Terry: Share one of your long term art goals with us.
Angela: One of my long term art goals is to focus on the here and now more often. I want to cut the volume way down on life chatter. I want to be more aware of how the invisible and visible are both present. That is what I believe it takes to make a good piece of work. 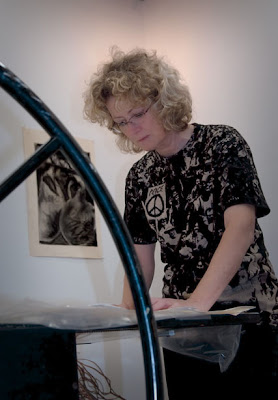 Angela Oates in her studio.
ARTIST STATEMENT/BIO
There are a few adjectives that come to mind when I think about a document that might be read as my biography. To name a few might include adaptive, emotional, imaginative and tired. As usual, it's quite a mix in this being.
It's been a long hard road, like working on the railroad all the live long day, but the one thing that I continue to try and do is to turn the corner from working to support my art, to doing my art to support my work. Willem de Kooning said something to that effect and it sure made sense to me. He said it was the real turning point from him. I get it. The psychological power of coming from that perspective is a better fuel and order of the universe. It's one I would like to achieve and maintain. Some comments of Charles Darwin also comes to mind...along the lines of...that it's not the survival of the strongest, the fittest, but the most adaptive that actually survive.
Art is kind of like that I think. I adapt, change, think, tear up, put back together..until it works for then and provides a hinge for the next. Concentration that causes me to float outside myself in a state of mystery. That's the cooking.
So getting back to those adjectives, I think the chance to have those going in my life at any given time is quite meaningful. The only thing I'd like to say now is that the tired needs to be the result of being tired from my life's art work...not from the railroad yard. In order for that to be true in the end, I continue to make the shift in my perception of how I make my living not fight the reality, but to change it to suit me better. To put it along my soul's line. Life is to be lived and enjoyed....and recorded. I always hope for more ups than downs. It's ok to be out here on perimeter road.
I thank you Angela. We rode the wave of a difficult work life together and I am so happy to see your True Work.
Go to:http://angelaoates.com/ to see more of Angela's work.
Thank you for spending time here at Studio 24-7 and I love hearing your thoughts and comments.
Posted by Terry Jarrard-Dimond at 7:15 AM