Margaret Leininger Takes Her Art To The People 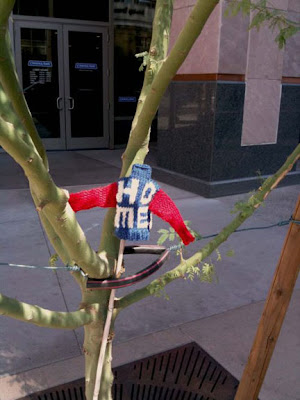 This tiny sweater is hand knit by Margaret Leininger and is part of her on-going Found Objects project.
About a year ago I received an email from Margaret Leininger. The email was special because I had taught Margaret one summer at the South Carolina Governor's School for the Arts. That was in 1989 and since that time she has pursued her art through first earning a BFA at The School of the Art Institute of Chicago and then an MFA at Arizona State University. She is currently a visiting professor at ASU teaching woven structures, 3D fibers and and art introduction class.

It is very exciting for me to learn about how Margaret has become such a successful and productive part of the art world. I had many students during the 10 years I taught in that program but know almost nothing about how many students went on to follow their art dreams. Thank you Margaret for taking the time to contact me.

Margaret Leininger Takes Her Art to the People

Margaret Leininger has been a very busy artists. She combines her love of textile materials and processes with her interest and concern for social issues through installations and interactive projects. She calls her approach ARTinvention which is the umbrella for her many projects. She says, "With all ARTivention projects, a collaboration evolves between the artist and the audience which in the words of Suzanne Lacey, is where the real art exists. To date, each project has highlighted a specific social concern, and has asked the viewer, audience, participant to not only interact with the work, but by doing so taking action to alter or make an impact upon the specific issue."

Here are just three examples of the projects Margaret has created.

Found Objects is an ongoing project which involves the knitting of tiny sweaters which Margaret leaves in public places. Each sweater has a tag with instructions for the finder to make a contribution to the National Coalition for the Homeless.
If you would like to participate in this on-going project, please check out my pages for directions for knitting and how to participate. 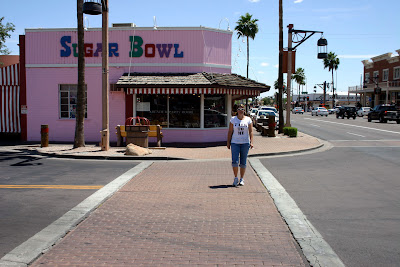 This Much I Know involved Margaret walking near Scottsdale Arizona and attempting to interact with people along the route. Notice her very bold tee-shirt "invitation". It says "Talk To Me."
Commune-ique explores what community means, how we represent ourselves and interact with each other. Made from hand-felted wool in collaboration with students from Rossevelt Univesity, the School of the Art Institute, ASU and clients of Lincoln Part Community Shelter, as well as other community participants, the portable structure was installed at various parks, green spaces and vacant areas throughout Chicago during the summer of 2010.
Interview

Terry: Tell us about the origins of your interest in textile processes and materials.


Margaret: I began my investigations into fiber as a freshman at the School of the Art Institute of Chicago. When I enrolled, I begged Anne Wilson (the instructor) to let me into her class. Later in the semester, I realized that I needed to focus my studies. SAIC does not require students to major in a specific field, so, for one week I spent 12 straight hours in each of my studio courses to see which one I woke up to the next morning wanting to go back and do more work. Weaving won out hands down. I still get a major thrill out of throwing the first shot of weft across a new warp and make strings turn into a physical malleable object. 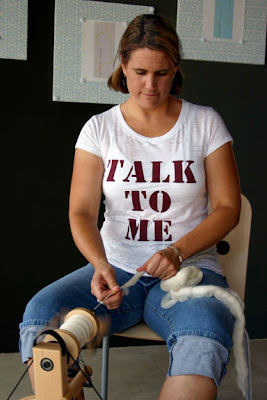 Margaret working on her spinning wheel while wearing her Talk to Me tee shirt.
Terry: Do textiles and textile process have some special quality that makes them rich for interactive art installation and projects?
Margaret: I think people tend to be more receptive to textile processes as most of us have been raised around a family member who quilts, sews, knits, crochets, needle points, etc. So, the level of fear or anxiety one might have towards painting (for example) is somewhat diminished when you ask the same individual to cut fabric or manipulate yarn. The inherent processes of fiber practices do lend themselves to installation formats due to the repetitive actions that they require. Also, artists such as Warren Seelig who manipulate non-fiber materials in a fiber oriented manner are able to encompass space, texture and pattern that often are architecturally experience.
Terry: For your Found Objects tiny sweater project, has anyone helped in the knitting of the sweaters?
Margaret: I have had many contributors to the Found Objects (and welcome more!) as I see this as a collective collaborative effort to invoke awareness about social issues related to housing, especially after the housing melt-down, and some basic precepts I have regarding accessible art. ARTinvention allows me the umbrella to work within socially engaged public practice that I find very fulfilling as it incorporates social justice outreach as well as breaking from the tradition of gallery/museum/institutional practices of the art world. 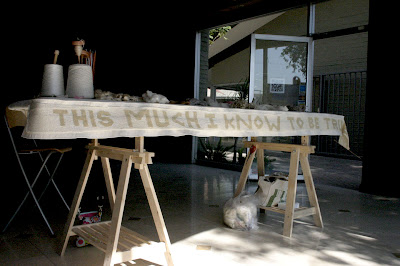 This image shows the final installation relating to This Much I Know.
Terry: Is there any component in the project that gives you any follow-up on what happens to these objects?
Margaret: I have been in contact with the person from the National Coalition for the Homeless regarding an up increase of on-line donations, especially during the summer when they are usually rather low. However, unless a finder responds via the blog or makes a notation along with their donation, the impact is unverifiable. I do hope, though, that this project raises awareness for the issues described and that it helps people to be more open minded about the struggles and difficulties that many people face, especially since this is an issue that isn't always visible. I have had positive feedback on the blog from finders and contributors, so in that respect, I see this project as successful.
Terry: What, if any, differences have you observed in viewers interest in interacting with you on projects based on being in either an urban or more rural location?
Margaret: Since I really haven't done any projects in rural locations, I cannot directly comment. However, what I have noticed from the two projects that really invited public interaction, Commune-ique and This Much I Know, is that site, location and culture all play a part in a society's level of interaction. Commune-ique was Chicago based and consisted of a portable tent structure made from hand made felt resulting from community collaboration. I installed the tent at several public locations throughout Chicago. Some people came by and chatted, interacted and photographed the structure. I am almost certain that if the same project was installed in the Phoenix metro-area that no one would approach the structure. It's a completely different culture, one built up of individualism and is re-enforced by the car and limited public gathering spaces. This Much I Know involved me walking 26.9 miles along a road that unites Scottsdale, AZ. I wore a Shirt that read, Talk To Me hoping to engage pedestrians or passer-bys. Only two people engaged with me on this journey, and one was a gentleman from Singapore. While un-verified, I do think that this project would have been completely different if done in other cities such as LA, New York or Chicago. I am hoping that the future will provide me the opportunity to prove this hypothesis, and I am sure some component of future work will continue to play with these observations and sociological conundrums that I find so compelling.
***
A big thank you to Margaret for taking time to share her story and her art. It was great to see what all you have accomplished and I know there will be much much more.
And thank you for spending time at Studio 24-7. I love hearing from you and Remember:
Commenting is FREE!!
Posted by Terry Jarrard-Dimond at 10:20 AM