Who Is Harold Krisel?

Harold Krisel may not have been a household name in the art world of the 20th century, but his work was central to the household he shared with wife Rose and their three children.
The dining table was his studio where he made art — paintings and prints that appear as fresh and relevant today as they were then.
A current exhibition of this work at the Spartanburg County Museum of Art includes works from the 1960s and 1970s with sharp lines and saturated colors. They are right at home in the city that was also home to the late Roger Milliken, founder and former CEO of Milliken and Company, one of the world's largest textile manufacturers and Krisel's primary patron. 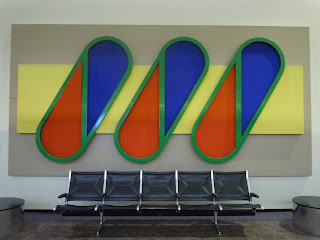 Three Obulates
Designed by Harold Krisel
Painted by Carl Tait
Greenville/Spartanburg Airport
While Krisel was working with famed architectural firm Skidmore, Owings and Merrill, from 1955-1965, Millken hired the firm to design his new headquarters building in Spartanburg. Krisel designed tapestries and carpets for the project as well as a dramatic 26,000 square foot aereation pond with a striking stainless steel spray fountain.
He was also commissioned to create murals for the new Greenville/Spartanburg Airport, championed by Milliken and built in 1962 to support this burgeoning area. 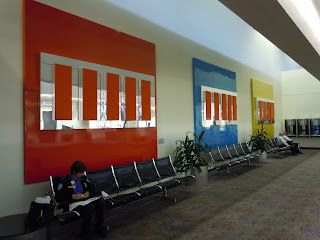 
Millions of travelers have since passed through this terminal, possibly taking note of the large-scale art but not being familiar with the artist's name. But all that changed in 2009 when Chicago's McCormick Gallery presented an exhibition of his work.
Krisel's daughter Judy Langille says he would be really surprised at the attention his work is drawing, and then she suggests another word.
"He would be shocked," says Langille, who most admired her father's "intensity; his ability not to care what others thought of his work."
"He did it for the love of it," she says. "He just had to do it."
Architect, Artist, Family Man
Harold Krisel and Rose Breuer met on a blind date on the Staten Island Ferry and married in 1942. After a stint in the U.S. Army, he enrolled in 1949 at the Institute of Design in Chicago (originally known as the New Bauhaus) under the G.I. Bill. 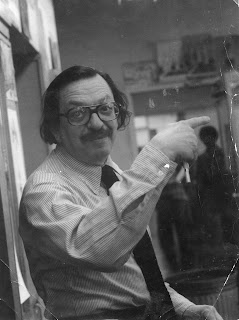 Harold Krisel pictured in class where he taught architecture
at the high School of Art and Design in New York City.
His many influences there helped direct his course of study and his career path. Founder Lazlo-Nagy had just stepped down and the new director, Serge Chermayeff, recognized something special in this new student and committed to his education as an architect.
He met famed artist Mondrian and developed friendships with Gyorgy Kepes, who founded the Center for Advanced Visual Studies at MIT; Martin Rosenzweig, noted graphic designer; and Harold Cohen the distinguished designer and architect. 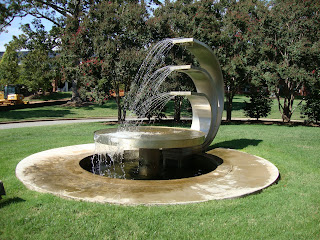 Krisel was commissioned to design the stainless steel water fountain
which is on Butler Avenue on the campus of
Wofford College in Spartanburg, SC.

During this period, he joined American Abstract Artists and maintained a lifelong membership.
To this day, he widow Rose says she has a hard time understanding the interest in Harold's work. "I don't understand conceptual art."
But she understood and appreciated Harold's devotion to his family. It is obvious Krisel was not driven by fame. 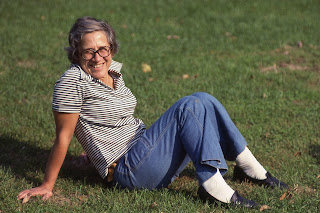 Rose Krisel, the widow of the late Harold Krisel.

After completing graduate studies at the Illinois Institute of Technology in 1952, Krisel taught briefly at MIT. Then he and Rose returned home to New York, where he pursued an architecture career, first with Kahn and Jacobs and later with Skidmore, Owings and Merrill.
During this period, he declined offers he felt would be disruptive to his young family. An invitation from Buckminster Fuller to work on the development of the geodesic dome required moving to Canada. An offer to teach at Harvard would have meant another move.
"Our dining table was his studio," says Rose Krisel. And for his growing family, extra art supplied became the children's toys. "Harold set up still lifes" for July, Elizabeth and Martha to draw," she says. 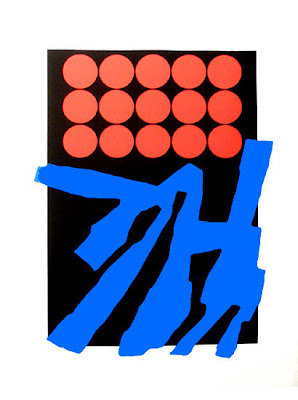 Red Circle - Silk Screen
approximately 20" x 20"
Harold Krisel
Included in the permanent collection of The Spartanburg County Museum of Art, Spartanburg, SC.
Eager for more time to pursue his art, Krisel resigned from SOM in 1965 and accepted a teaching position at the High School of Art and Design in Manhattan. Rose, also a teacher, says Harold enjoyed the regular hours and the summers off.
"He had always wanted to be a museum curator but was discouraged from this career because he was Jewish."

To see many other photographs visit here; http://www.flickr.com/photos/dimondgirl/

The article for tomorrow is: Time to Clear the Table


On Oct. 24, Fab.com will be offering a selection of original prints for sale from the Krisel Estate. If you are interested you can register to view this offering via this link: Fab.com/


Thank you for spending time at Studio 24-7. I love hearing from you and remember:
Commenting is FREE!!!
Posted by Terry Jarrard-Dimond at 7:00 AM