I imagine many of you knit and perhaps taught yourself to knit.  I learned when I was a freshman in college but my skills have not progressed and recently I feel they have digressed! 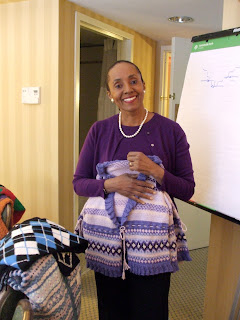 I turned my attention to this situation and as it often happens, as soon as I focused, wonderful new information surfaced in the form of an excellent book titled: Knitwear Design Workshop: A Comprehensive Guide to Handknits by Shirley Paden.

I was not familiar with Shirley Paden but as I began to look through the book I realized I had seen her design work many times in magazines and books.  I realized have some of her patterns in Vogue Knitting magazines which I have saved.  Before I talk about Shirley's path to this career, let me say that her work is stunningly beautiful, complex, stylish and timeless.  These are patterns written for knitters who want their work to be worn but also treasured for the special garments that they are.  Her patterns are not for the faint of heart or for knitters with poor skills.  That is the down-side.  The up-side is that she understands her art and her craft and through her book she offers clear instructions for learning the skills required to follow her patterns, alter her patterns or other designers  patterns as well as create knitwear patterns yourself if you want to take that step.
The book was published by Interweave Press and the version I purchased is spiral bound in a hard cover but there is a soft bound version as well as an ebook.  The book is available from Interweave as well as many other sources. 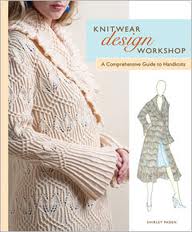 On receipt of the book I made myself a promise that I would begin in the front and read everything rather than doing my usual skipping around.  I actually began by reading the Foreword....and I'm so happy I did.  Her path to this career  is as compelling as her design work.

Shirley was in the information technology industry.  She knew how to knit but had not been actively practicing the craft.  A co-worker who was learning how to knit asked Shirley if she could knit and on finding out she could, asked for help.  Shirley relates that this experience sparked a feeling of epiphany and that night she proceeded to visit a knit shop, bought some needles, yarn and a pattern book.

She began knitting and on the occasion of having a hospital stay she took her needles and yarn.  While still in the hospital the company she worked for was sold and she realized she was unemployed and at a crossroads. 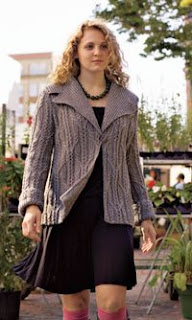 Now this is where the story became interesting to me.  This new interest in knitting and the delight she felt with the entire process inspired her to "follow her bliss" and become a knitwear designer.  Now you may be asking yourself what she knew about knitwear design that would support her idea that she could follow this dream.  From her account the answer is "not much".   Despite that small detail she had that famous "burning desire" and she laid out a plan which included a business plan and a plan to educate herself to be able to design and knit custom garments for individuals.

I'll cut the story short to say that she has been very successful cultivating many avenues for her design work.  If you check out her website there is a wonderful video in which she talks about her work.  She states that clothing designers are artist and she recognizes that her works shares the same creative process that all artists experience.  I like that.

You can also find a list of places that Shirley teaches and if you are in the New York City area you can find her teaching is several city locations during the summer.

I really appreciated this story.  I know so many people who would love to change the directions of their lives but have not been able to make that change.  I do not know all the elements that make it possible for one person to succeed to make this type of change when others don't but when you read Shirley's words, her clarity and self belief ring loud and clear.

I hope I have an opportunity at some time to meet Shirley Paden.  I'd love to take a workshop in person but for now I'm reading her book, practicing her instructions and working toward improved skills and the future creation of knitted family treasures.

Thank you for spending time at Studio 24-7.  I love hearing from you and remember:


Commenting is FREE!!!
Posted by Terry Jarrard-Dimond at 9:30 AM