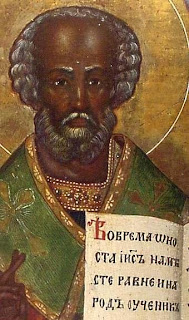 While investigating images and ideas for this series of articles I did a search for ethnic Santas.  One caught my eye on a site titled: Rasta Livewire. Here you will find an interesting article telling the story of a man named Nicholas who the writer states is the person who inspired the idea of Saint Nicholas or Santa Claus..  The website states that the story was  fashioned after a real person named Nicholas who was  a member of the dominate class of Muurs and lived in Turkey.  I am not a historian so I have no idea as to the true history of this person but I thought it was very interesting.  You might enjoy checking out the article and perhaps expanding your idea of the origin of this popular cultural icon.

Thank you for spending time at Studio 24-7.
I love the idea of Santa no matter what
the origin.  He is magic.
Posted by Terry Jarrard-Dimond at 8:30 AM

Email ThisBlogThis!Share to TwitterShare to FacebookShare to Pinterest
Labels: Christmas