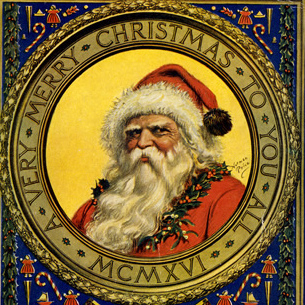 I'm not sure this Santa qualifies as a "jolly ole efl".

Those of you whose families celebrate Christmas likely have a collection of photos of you sitting on Santa's lap taken at a department store, church or other gathering.  I suspect as many as 75% of these images feature you screaming, terrified of this strange man with the too red cheeks and cheesy synthetic beard.  Parents who subject their smaller children to this trauma are exposing a little streak of naughty.

This above particular santa's come hither look is far too suggestive for my taste but he does have a nice hat and great beard.

The best Santa I've ever seen was at Phipps Plaza in Atlanta, Ga.  His beard was real, his suit was velvet and he kept his hohoho in check.

The worst Santa I recall was sitting in front of a country grocery store on a platform which was being pulled by a ram-shackled unwashed pickup truck.  He was far too skinny and his lack of gloves revealed a tattoo on the back of one hand which said "deal maker".

I love the idea of Santa, someone who tries to make your dreams come true.  Of course the dreams of many are never fulfilled under the Christmas tree but if you see one of those Angel Trees in your community you might consider playing Santa for some boy or girl in your area.  This will qualify you as a Real Santa.

Thank you for spending time at Studio 24-7.
May all your dreams come true.
Posted by Terry Jarrard-Dimond at 8:30 AM

Email ThisBlogThis!Share to TwitterShare to FacebookShare to Pinterest
Labels: Christmas