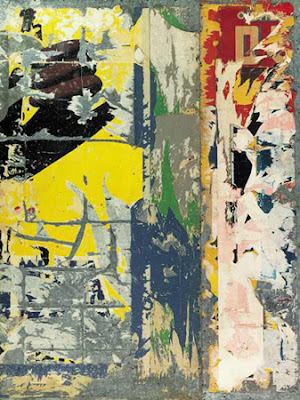 Back in December we visited the Museum of Contemporary Art in Los Angeles.  We saw a wonderful exhibition, destroy the picture.  The show featured some of my favorite artists including Alberto Burri, Francois Dufrene, Raymond Haines, Lee Bontecou and Shozo Shimamoto.  Actually I could just say all the artists in this show are faves! 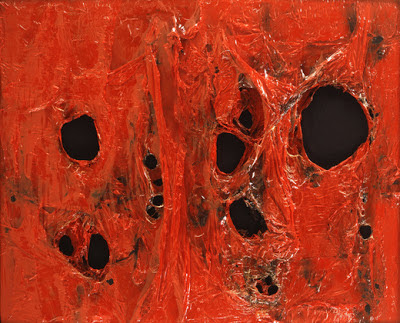 What do I like about this work?  Well it certainly doesn't fit into the standard "beauty" mode which many find appealing but I believe what I find so compelling is the outpouring of raw emotion and physical involvement by artists with their medium.  The "beauty" comes from the life experience of the artists.  The work in this show has been pounded, burned, torn, cut, ravaged by weather and as the title says, destroyed.  The remaining object is a testament to the rage and pain of the time in which they were created.

There is a quality catalog which documents the show which you can purchase online through the museum store as well as through amazon.  If you are interested in this work the book is a good value. 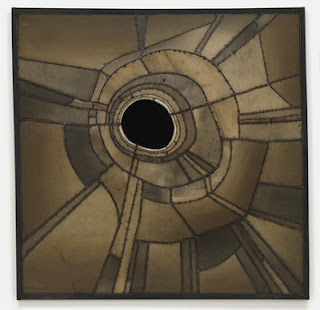 The following is the first paragraph of the commentary from the catalog by Paul Schimmel the former Chief Curator for MOCA.  Destroy the Picture was the last exhibition he curated for the museum.

"Destroy the Picture: Painting the void, 1949-1962" focuses on destruction as a mode of production in international painting of the post-World War II period through the early 1960s.  It considers the work of artists in Europe, Japan, and the United States who staged a literal assault on the picture plane.  Some used techniques such as puncturing, ripping, cutting and burning to break through the two-dimensional support.  Others used layering, relief, and assemblage to emphasize its three-dimensionality.  On one level, these experiments represented purely formal investigations, as artists questioned the status of flatness as the irreducible conditional of the medium of painting.  Simultaneously, the assault on the picture plan resonated with an existential void that was opening up after the war.  At the dawn of the atomic age, humanity was forced to confront the horrific legacy of unprecedented devastation-the Holocaust, Hiroshima and Nagasaki, and approximately 60 million deaths - as well as the inauguration of the age of mutually assured destruction, a theoretical doctrine that became terrifyingly plausible during the Cuban Missile Crisis of 1962.  Many artists figured the void literally into their works through the use of the techniques mentioned above.  But for these artists, destruction was not just a nihilistic act, and the void was not just a black hole of despair and anxiety; destruction was in a dialectical relationship with creation, and the void was a space of potentiality.  From the embers of the destruction of the picture plane emerged a medium reborn that powerfully registered the complex experience of living in a world perched on the brink of self-annihilation."

If you visit many shows and exhibitions you will certainly see work that is pure fluff.  Nobody could say that about this work.  This is work produced from extraordinary life experiences and an extraordinary time in history.

Email ThisBlogThis!Share to TwitterShare to FacebookShare to Pinterest
Labels: destroy the picture, exhibitions