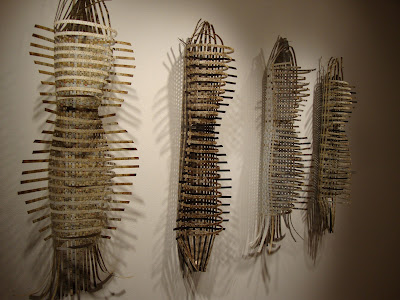 I returned home Sunday from the opening activities for FiberArt International in Pittsburg, PA. tired but gratified for making the trip and for having been selected to be part of this exhibition.  The quality of the pieces in this show was one of the best and most uniform I've ever seen.  The jurors certainly put together a diverse exhibition showcasing the breadth and intelligence of approaches to work being created in the wide world of fiber.

Before I go any further I want to thank The Fiber Arts Guild of Pittsburgh not only for the fabulous work they did on the show but for the hospitality which was expressed through greetings, gatherings and discussions about the work.  There were smiling faces everywhere and their pride in this show was obvious.

The show is held in two venues, the Pittsburg Center for Art and the Society for Contemporary Craft.  The two locations are very different from one another but each show was beautifully installed and looked great.  My work was at the PCA in a very nice spot on the wall across from the entrance to one of the galleries.

So here's a second link to the place where you can see ALL the work in the show as well as the prize winners: http://fiberartinternational.org/  but before you go I want to share some of my faves and a few quick notes.

The featured photograph for my post today is Vestiges of Emanipation by Sandra Jane Heard.  Those of you who have known my work for a long time can easily understand my attraction to this work through it's use of metal stripes. The original idea came to Sandra after her grandmother died and she found some tape measures among her grandmothers belongings.  The idea of using the tapes to construct forms which reference female figures beginning to burst free is intellectually solid and visually compelling.  This work received the 2013 Directors Award. 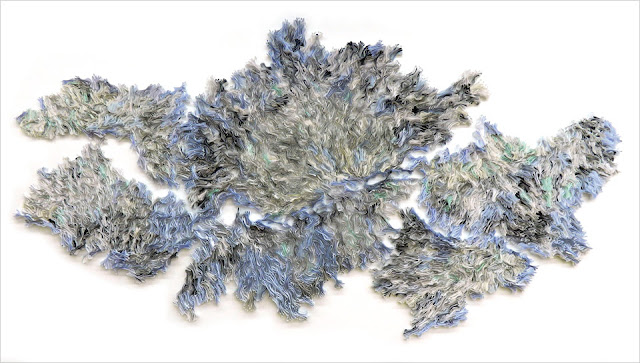 Disease Mapping by Julie Abijanac is installed at the SCC on a large wall in the back of the gallery.  As I approached the work I was totally mystified as to the materials used for the work and was surprised to find it to be constructed of copy paper, folded and stitched into "little sandwiches". 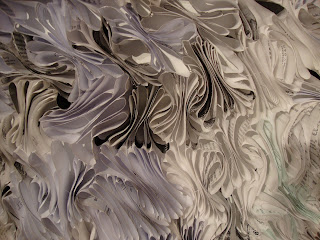 This is a detail shot I made which might help you understand what you are looking at.

I spoke with Julie about the origin of this work and she shared that it began during her treatment for Hodgkin's Lymphoma which she has survived.  During her treatment she was shown field-stains which are records of a cancer's growth and she observed how beautiful the cell structures were.  She began to first draw them and later developed this method of constructing what she drew.   She is now mapping other cell structures related to cancers.

The piece is large and delicate and very complex.  I inquired as to how she ever communicated the method for installing the work and she revealed that she drove up and installed it herself.  Thank you Julie.

Julie is young and vibrant and had the biggest smile on her face I've seen in a long time.  Congratulations Julie, you ARE a winner.

I may post more work and comments later as there are many works from this show I responded to but today I want to mention just one more. 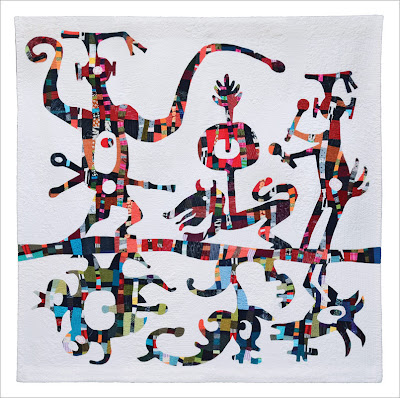 This lively work is by artist Elizabeth Brandt.  Elizabeth has used some traditional techniques, applique and stitching, to create a very original work.  When I first looked at the work I had the impression that the top figures were being reflected across the bottom or perhaps the bottom figures were the shadows of the top figures but that is not the case. All of the creatures are unique, lively and beautifully constructed.  It has an ethnic look but to my knowledge not drawn directly from any specific culture.  The while background is stitched densely and has the feeling of drawing.  The stitching demonstrates excellent use of free-motion stitching by not only supporting the work but adding to the work.  Can't wait to see more Elizabeth!

I was very pleased to learn that this show will be traveling to South Carolina in 2014 to the Franklin G. Burroughs - Simeon B. Chapin Art Museum in Myrtle Beach.  The show will be there from January 19-April 24 and I will certainly be revisiting.

To read a review of the show in the Pittsburg Pop City visit HERE: http://www.popcitymedia.com/features/FiberPgh041713.aspx 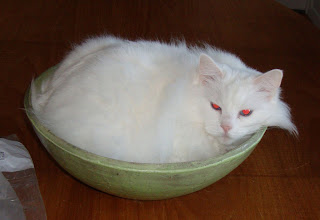 One of Suzanne's Cats

Thank you Suzanne for being such a great hostess.
We had a wonderful time.

Thank YOU for spending time at Studio 24-7
where ART is always on the menu.
I love hearing from you and
Commenting is
Free.