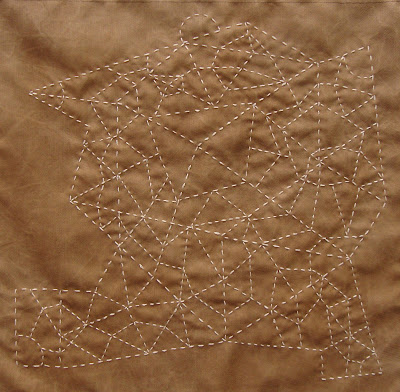 Last week I posted about my process of staining a new silk and wool broadcloth which is available from Hank and Spool.  The process involved applying wet finely ground coffee to the fabric and grinding it into the surface with a pestle.

After approximately 24 hours the coffee had dried on the surface of the fabric and I was able to brush it away to check on the color.  At that point I felt the color could be deeper so I reapplied the alum mordant described previously and allowed it to dry.  I prepared new coffee grounds and actually made coffee liquid which was poured over the fabric.  I did this both on the broadcloth and a piece of cotton muslin.  The most interesting thing about this was seeing that the cotton absorbed the liquid while the broadcloth repelled the liquid.  The liquid sat on the surface and soaked in over a period of a few minutes.  I shouldn't have been surprised as wool is known for it's ability to repel liquid.  At the same time, when it begins to absorb liquid it can hold much more than it's own weight.  (Wool was once used to make diapers due to this property. ;-)

Watching this slow absorption  I expected I would get lots of texture on the broadcloth but in fact it stained/dyed very nicely leaving only beautiful markings from later being crumpled when washed.  The color from the second application is very rich but not as red as it appears in my photograph.  The next application I want to try with this fabric is full emersion rather than applying to one side.  The back of the fabric is many shades lighter than the "front".

Using silk thread also from Hank and Spool, I began stitching by creating a random set of points which I then connected by stitching lines between them.  As I stitched I saw a abstract running figure and I then focused on filling this figure in with lines both descriptive and decorative.  I haven't completed the work as yet but I plan to work on the background with cotton embroidery floss in a color similar to the background itself. 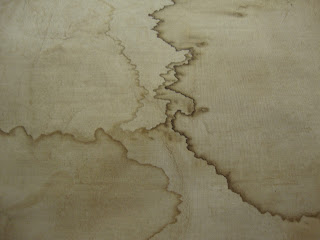 This photo shows the results of the coffee staining on the muslin.  The color is actually darker than the photo but not nearly as rich as the broadcloth.  This is the type of markings I had expected on the broadcloth.  I think because the cotton fabric is thinner it allows the liquid to spread quickly in rings but then stops and slightly puddles at the edges which creates the darker markings. The wool/silk fabric distributes the liquid more slowly and evenly which results in a more softly modeled pattern.

I plan to continue the stitching and will post the final piece when completed but that may not be next week.  We'll see.

Thank you for spending time at
Studio 24-7
where tea is in the cup
and coffee on the fabric.

Don't forget
Commenting is FREE!!!
Posted by Terry Jarrard-Dimond at 8:37 AM