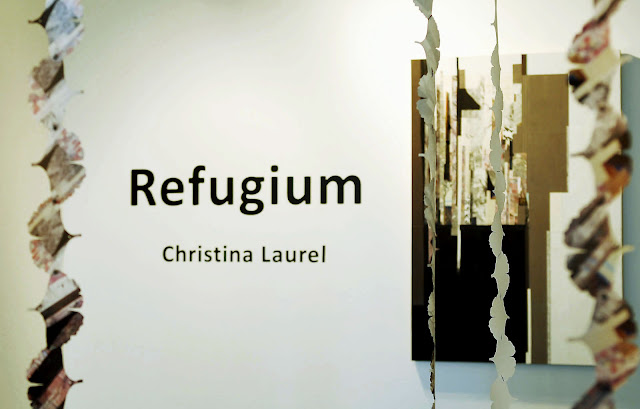 It is always interesting to watch the development of an artists' work over time.  I've know Christina Laurel for several years and her new installation work is a beautiful and meaningful extension of her exquisite two dimensional collage and sculptures.  The show is installed at Greenville Technical College's Riverworks Gallery in Greenville, SC and will be up until April 17, 2016. 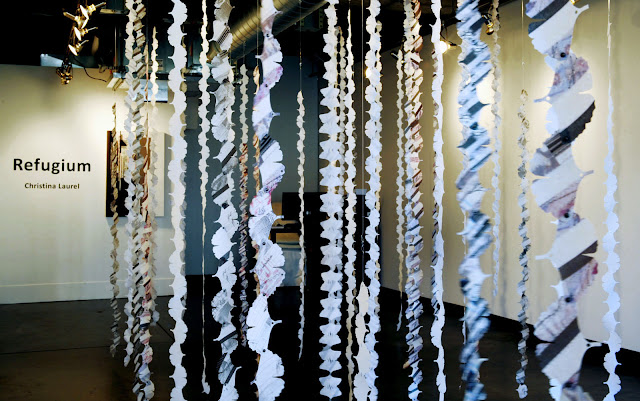 Long strands of paper ginkgo leaves hang from the ceiling and flutter and sway as people open the doors of the gallery or walk past or through the space.  The leaves are made from specially treated paper with delicately printed images of Christina's work. 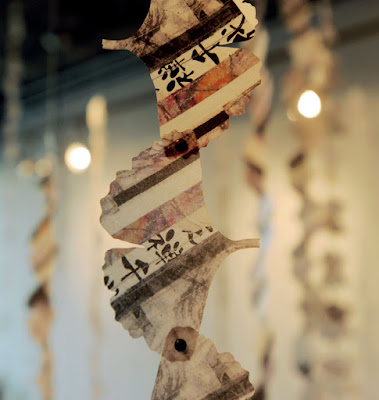 The desire to have people interact with her work in a new and more physical way was one of the forces that inspired this new direction.  Christina had shared her thoughts about making this piece with me as she began to resolve all the artistic and technical issues involved so I had formed some specific ideas about how it would be resolved.  I think because the artist herself is such a joyful person I imagined light flickering from the leaves as you passed each strand.  While that is not the case literally it is true metaphorically. 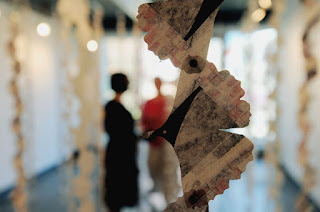 Here is Christina's statement about the installation.

A refugium is an area where special environmental circumstances enable a species to survive after extinction in surrounding areas.  This "Refugium" is an oasis - a refuge - from the sensory bombardment in today's world.

Why the gingko leaf?  In part because it is a survivor of 200 million years.  In the US the ginkgo withstands urban pollution, and in Japan the gingko is a symbol of endurance; it is one of the trees that survived Hiroshima.

My artwork removes the barriers of glass and frame but presents recognizable imagery - in this case, the gingko - in an abstracted way yet at a human scale.  Viewers are invited to enter the installation with "eyes to touch" and, in essence, become an ephemeral aspect of "Refugium" itself.

To read more about Christina follow these links: http://www.gvltec.edu/riverworks/ and http://www.claurelartist.com
Posted by Terry Jarrard-Dimond at 8:42 AM