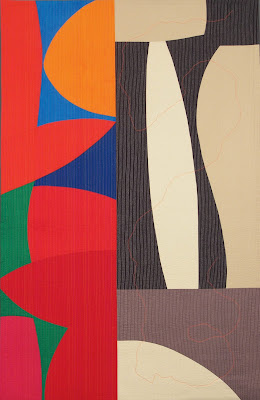 The Florence County Museum announces an exhibition of works by veteran South Carolina artist Terry Jarrard-Dimond as part of the South Carolina Arts Commission's recently launched 50th Anniversary exhibition program.  The program was developed to celebrate 50 years of public support for the arts in South Carolina, with emphasis on the achievements of artists who have received the commission's Visual and Craft Fellowship awards.

The exhibition at the Florence Museum is titled EVIDENCE; The Art of Terry Jarrard-Dimond, 1987 - 2017.  It will be held in the museum's Special Exhibits Gallery, and will be on view from June 20 to December 3, 2017.

Jarrard-Dimond received the SCAC Craft Fellowship Grant in 1987, 20 years after the incorporation of the South Carolina Arts Commission.  She is represented by three works in the State Art Collection.

Terry Jarrard-Dimond grew up in Greenville County, SC.  She was one of 27 students in her class in a school which emphasized traditional conservative educational principles.  Art was a recreation, rather than a practical part of her education.  After the sixth grade artistic instruction came to an end.

Jarrard-Dimond's parents ran a hardware business in the small town of Marietta.  During one of father's frequent visits to a supplier for merchandise she convinced her father to buy her some oil paints and supplies. By the time she was a teenager, she had developed an intuitive interest in the properties of physical materials like wood, wire and textiles and had developed a compulsive desire to "always be making."

Her first academic exposure to fine art came while attending art classes at Winthrop College.  At that time it was an all-girl school.  While the art faculty recognized Jarrard's talent, the school never encouraged her to pursue post-graduate work in art, with one exception; in the last year of school she was introduced to an instructor who had been newly appointed to fill a temporary teaching position in the department.  His name was Tom Dimond and he introduced her to the idea of continuing her art education.

Tom Dimond and Terry were married and the couple moved to New York City. After the birth of their child, Adrian Dimond in 1970, they returned to South Carolina.  Upon their return to  several things happened. Terry made the acquaintance of weaver Alice Schlein, earned an MFA degree from Clemson University, had a teaching career and later worked as a designer in the textile industry.

Over the past thirty years, Terry Jarrard-Dimond’s use of overlapping marks, layered materials, and literal woven elements, has explored continuous themes of interconnectedness.

The artworks on exhibit will include early sculptural works which utilize found objects in conjunction with constructed forms, as well as Dimond’s later explorations in large scale geometric compositions using hand-dyed, contemporary textiles. Finally the exhibition will look at several works from Dimond’s more recent two-dimensional experiments with encaustic and acrylic paint.

In her own words, “All living things leave physical evidence of their existence. Evidence is generated by the activities each performs… from the monumental to the minute. My work is my evidence.“

Other upcoming events and exhibitions in the year-long SCAC 50th Anniversary program will be held throughout the state, in Columbia, Greenville, Charleston, Sumter, and Rock Hill. Jarrad-Dimond’s work will also be featured in an SCAC group show at the Lee Gallery, Clemson University this October through November.

For more information, please visit flocomuseum.org and southcarolinaarts.com, or contact the Florence County Museum at 843.676.1200.

Posted by Terry Jarrard-Dimond at 12:34 PM