The first four versions of our project have all been interesting. Each artist has worked with the composition in a thoughtful way, interjecting their personal vision into the piece. The composition has become more complex and challenging as it has passed through the hands of the first four artists. I had been thinking that soon, someone would be forced to rearrange something because space was becoming limited.

Several of the artists wrote me inquiring about possible changes they might do to the piece: could an already existing element be reshaped, or could you do a surface design process on someone else's contribution etc. As these issues were resolved I received the following email from Shelley Brenner Baird that I thought was interesting. Shelley wrote, "I find these questions really interesting because for me the project really does have distinct phases and what seems to be the middle phase is a lot harder than the initial phase where we were mapping out space, and using up a lot of it. That leaves editing and altering as the next logical step. I would be happy to see my stuff cut up, drawn on, sewed on, or added to!! For my way of working the first phase was really hard for me. "

I agree with Shelley, it's becoming more difficult. This weeks artist, Judi Hurwitt, has really broken things open by doing an overall reorganization of the piece.

I'll just say this right up front - I knew even before the Conversation piece arrived in my hands that I wanted to dismantle it. I'm like a little kid that way. I learn, in part, by deconstructing something and then reconstructing. I knew that putting it back together so that it looked exactly as it had before would never satisfy me - I was going to rearrange every element I could, leave off what I couldn't use, and hope no one hated me for doing it.

The boldness of this plan, of taking apart someone else's work and reinterpreting it, made me shake in my shoes. Me, a complete unknown. Who do I think I am?

But I wanted to remain open to all possibilities. I even contacted Terry - an probably scared the tar out of her - and asked if the background fabric could be altered, painted, overdyed or replaced. And secretly, of course, I wondered what I believe we're all wondering: will I be the first one to take the scissors to someone else's work?

These questions gave me some sleepless nights.

When the quilt top did arrive, I donned my leather work gloves to guard against the many pins Shelley had kindly warned of, pulled it out of its box and spread it out on my work table.

The first thing that occurred to me was that the piece wanted to be ironed and de-fuzzed. There were some minor wrinkles, and some of the elements were, as could be expected, fraying a little.

I took each element off, carefully pressed and de-linted it, set it aside and went on to the next. I pressed each piece. I love the aroma of a hot iron touching clean cotton. What charmed me most about ironing the Conversation was how much I learned about Terry, Rebecca, Beth and Shelley in the process.

I learned that Terry was bravely willing to dive into the deep end of the pool with the color choices she made to launch our project. Her red shape against her background of gunmetal blue felt like a bold declaration of joyousness achieved through contrast. Rebecca had to have worked like a demon to create the shape she contributed to the conversation...each edge was so very carefully turned under and then supported with a matching paper lining. Beth also used a lining to support her stripes, which - I got a huge kick out of learning - she stitched with powder blue sparkly thread in what looked like the bobbin. Her hand-dyed fabrics and the meticulous pressing open of her seams spoke to me of talent and a strong studio discipline. And the fabrics that Shelley added - well I just fell in love with both pieces, but particularly her focal piece, the large rectangle of yellow/green painted fabric she dyed and painted. This fabric sang to me and helped inform the way the quilt top was finally reassembled.

The first piece I repositioned on the background was a large black shape that Beth had added. It had been folded and when I opened it up to iron it, I noticed that one long edge has subtle curving arcs cut into it that meet in the middle like a widow's peak. I wasn't sure if that had been intentional, but it fascinated me and I wanted to celebrate that edge, if I could.

The second piece to go back was Shelley's focal fabric, right on top of the black. I wanted that fabric to pop against its background and didn't want to cover too much of it, but I also wanted to make it relate to the other pieces around it. To accomplish that, I laid Rebecca's mustardy-green shape within the boundaries of Shelly's fabric, asking each piece to converse with one another.

I positioned Rebecca's shape so that on it's left side it mimics and blends with the painted circles and curves of Shelley's piece, and on the right side, it emphasizes the gentle curve of the black element. The interaction of the three is gorgeous and looks for all the world like a Matiesse-esque female form.

At this point everything was still clumped together in the center and there was no tension to break the happy homogeneity. In response, I brought back some of Beth's stripes of hand-dyed fabrics and, to help draw the eye and give interest to the whole piece, I angled them inward, as Beth herself had originally done.

Terry's bold red element was next positioned to reinforce and balance the reds in Shelley's piece. And to help balance the entire quilt top while adding a much-needed horizontal element, I stretched Shelley's second piece, a long, angled shape with a lovely frayed edge, across the top. I got a kick out of the way, the angle of the stripe and the angle of the print on the fabric were almost exactly the same when I slipped it under Beth's stripe. Everything just seemed to fall into place naturally. 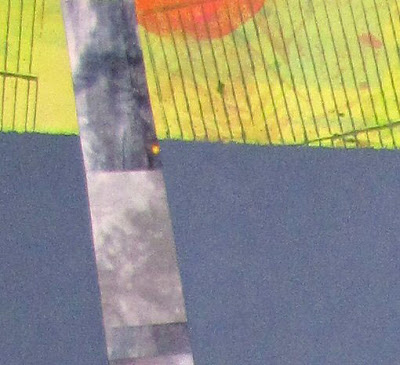 At this point I stopped and photographed the piece. 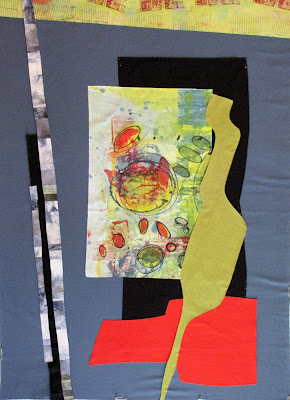 I really loved the wonky angles and the fact that, in spite of those angles, all of the pieces still seemed to be harmonizing with one another.

At this point, I was looking at my biggest challenge: how would I add elements of my own to the piece which would support and elevate it without adding too much visual chaos?

I decided that the best way I could contribute to the Conversation from this point was to think smaller. I had already changed the direction of the conversation; it didn't now need me to overwhelm it with a large element of my own making. It was asking for a more delicate touch from me (and if you've seen my work, you know that "delicate" is a relative term for me - I crave chaotic color and texture).

The stripes seemed to need more of a connection to the other elements, so I popped them off the background using three small vertical red elements from my stash (white muslin strips, painted with thinned liquid acrylics and scrunched into a Dixie cup to dry) whcih also helped to draw more of the red component into that quadrant of the quilt. I used a little repetitive design theory and added two more of the small dyed/painted pieces, placed horizontally onto Terry's red element. At that point, I felt it was time to stop before I went too far. This is the piece I sent on to Leslie... 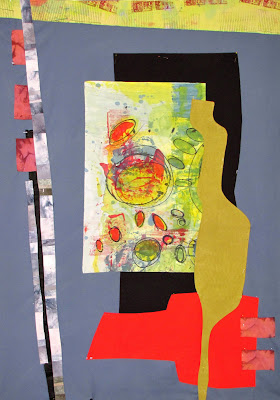 Despite the many straight pins, there was only one injury and when it happened, I was more worried about bleeding on the work than I was about the fact that I really was bleeding. I may have even cried for Mama for a minute or ten but didn't hear that from me, understand? 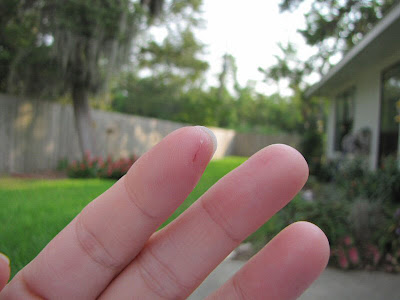 
This has been an exhilarating experience for me. It's the first time in my career that I was asked to participate in something like this. I feel incredibly honored to have been asked to work along side so much talent and experience. I started this project with the faint but persistent worry that I might freeze solid when the piece arrived and not be able to see my way forward. However, because I was first able to closely examine all of the components of the quilt, I found myself inspired and energized by their beauty and craftsmanship and fully prepared to make my proud contribution.

Thank you for this opportunity, Terry. 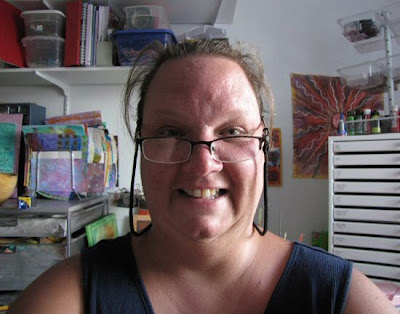 I am a 45 year-old paper and textile artist based in Houston, Texas.

My work is a reflection not only of the contemporary world I see around me, but also of my upbringing in the late sixties and seventies. I strive to represent my voice and views through careful manipulation of textures, colors and materials in a balanced design. My mediums of choice are varied and can include anything from fragile, hand-painted threads to metal and stone. 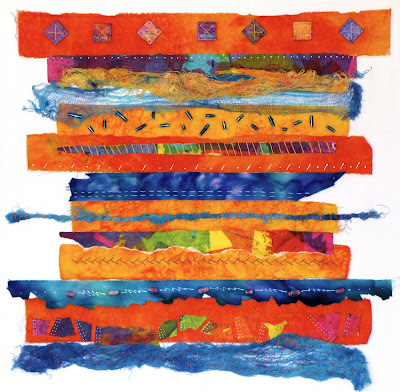 
My personal aesthetic has always tended towards the linear-straight, clean lines, simple geometric shapes, bold blocks of color. My spirit, however, is somewhat chaotic and irrepressible. Through my art, I strive to express these two traits in a cohesive fashion by combining linear, geometric elements with unexpected materials, bold color palettes and energetic thread work.

My primary focus is on paper but a recent obsession has sent me on what has been, so far, a joyful and exhilarating journey into textiles.

Well I think we can all see that Judi had a blast and really dug into this project. Thank you for your energetic description of your process. Good job! Now the piece heads out west to Leslie Bixel, a wonderful person of many talents and accomplishments. See you next week with Compositional Conversation: Stage Six.
Posted by Terry Jarrard-Dimond at 6:57 AM