Compositional Conversations is spreading out into new territory. One of our artists, Fulvia Luciano of Rock Hill SC has begun a video of this project and today you can be part of the Viewing Party. Just click on the arrow on the blue screen and see each stage of the piece as of today. Thank you Fulvia! This is really neat.

Second surprise for today is the Compositional Conversation Grid. People have been asking to see the pieces next to one another and I was finally able to get that put together. Just as we will add to the video, I will be adding images to the grid. 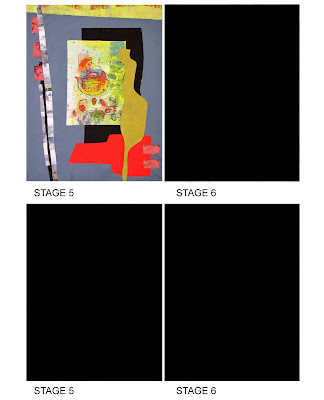 This arrangement demonstrates the progression of the various stages of the Compositional Conversation. Stage One is on top left, stage two top right and it progress in that way. Each weekend I will update the grouping as we move forward.


Have a great weekend and I will "see" you on Monday with Leslie Bixel and Stage Six.
Posted by Terry Jarrard-Dimond at 7:43 AM