Compositional Conversation is now in Stage 11! We should figure up how many miles this work has logged. I'll have to work on that.

This week our artist is Valerie S. Goodwin. Known for her unique and beautiful work inspired by landscapes and cities, Valerie shares with us her equally unique process and approach to this project. Here are her comments.

The package arrives from Paula ! After work, I opened the box and rolled it out on the dining room table and fell in love with what I saw. My initial thought? This piece is complete, there's nothing more to be done! Darn it....I got the composition at the tail end:)!

That night I had a strange dream. I was at my studio and all the other artists were with me. We were all discussing the quilt. Suddenly I look around and my studio space has miraculously gotten larger...it's south wall opened up and on the other side was a group of contractors -- all wanting to put in their 2 cents worth! They clearly just didn't "get it"......they wanted to know whose bed would it fit on! We started laughing and then I woke up for my nightly run to the bathroom;)

I know the dream makes no sense...but I thought I'd share it anyway!

I finally get some free time and retreat to my studio with our little project in hand. As I stare at it on the wall.....I'm still thinking "This composition is telling me to leave it alone". Good thing I had printed out a copy of it onto a sheet of 81/2" x 11" paper. My next step was to evaluate it at a smaller scale....for me this always helps.

Then I laid down a piece of trace paper and made a few sketches.

As I sketched a few goals surfaced:

I moved the fabric pieces around for part of the afternoon. 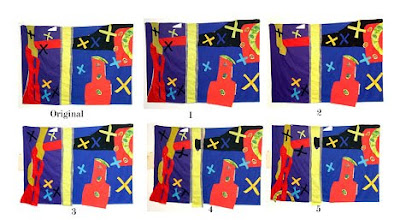 So -- are we now having a conversation that is winding down? I guess that was my approach. I treated it like I was adding my take where the punctuation marks should be. I am not in any way saying that our subsequent artists need to take the same approach...this is just what I was hearing from our piece.


It was hard to let go of "Mary" (she told me her name;) Even now she's whispering to me. She is saying "I need tweaking here and I demand tweaking there!" I'll be curious to know what Mary tells Kathy next week. 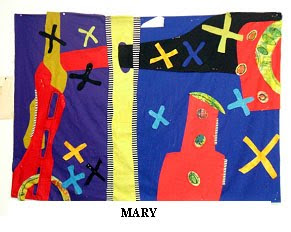 A big 'thank you' to Valerie for a most interesting commentary. It appears that every stage of this project has it's special challenges. And now the work has a name. Will Mary speak to Kathy, Leslie, Marina or me....stay tuned as to "Compositional Conversations". 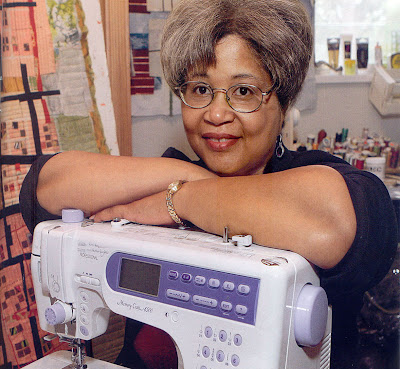 Valerie in the studio.


Valerie S. Goodwin is a mixed media fiber artist whose background as an architect plays a fundamental role. She began designing and making quilts in 1998. Her interest began as part of her involvement in teaching architectural design classes at Florida A&M University's School of Architecture. Her students investigated parallels between architecture and quilting as an introduction to ideas about composition, ordering systems, color and pattern. 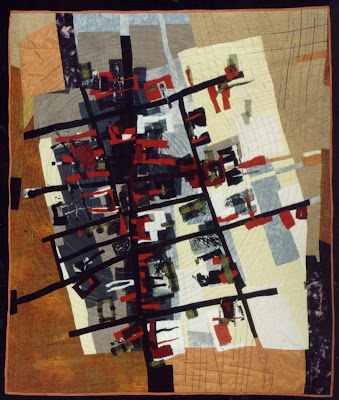 
Overall her art has moved through various stages from traditional quilting to an interest in abstract expressionism and, more recently, work inspired by real and imaginary landscapes and cities. In some cases her work shows an architectural sense of space with an archeological perspective. In others, the network of the city and its built form is more prominent. Her compositions work on a number of levels, from close up and far away as if you were looking at it from above. 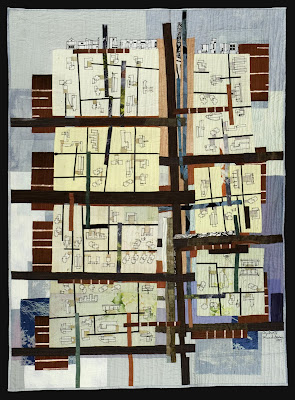 Goodwin's work is noted for its use of color, emphasis on line and density. Her quilts are part of a continuing investigation of ideas that focus on geometrical relationships, patterns and ordering principles found in architecture. Her work conveys these ideas abstractly, through the use of collage, layering, transparency, density and improvisation.

She earned a Masters degree in architecture from Washington University in St. Louis after receiving her undergraduate degree from Yale University. Her work has been widely published and exhibited. She has also lectured and given workshops across the country.