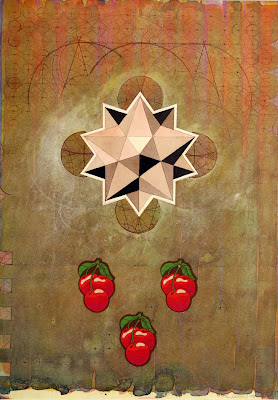 Trinity V2
Watercolor - 30" x 22"
Tom Dimond is a dedicated painter who just happens to me my husband. We met in 1968 when he came to Winthrop College (now Winthrop University) in Rock Hill, SC to teach. He was still finishing up his MFA from the University of Tennessee and I worked with him to complete some work for his thesis exhibition. We have been a team ever since. 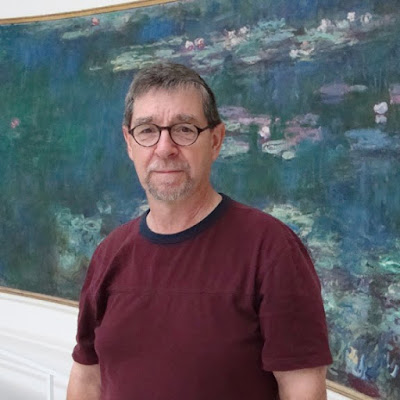 Tom with Monet's Waterlilies
Tom has always been an inspiration to me. His work is both beautiful and sophisticated and while trends and movements have come and gone over the years, he has remained committed to his work and the ideas behind his formidable body of work. He has an amazing ability to recall the names and work of artists he sees, knows or reads about. He has always been a great source of information for me as well as the many students he taught during his tenure at Clemson University. Tom was the director of the Rudolph E. Lee Gallery in the College of Architecture, Art, and Humanities for 15 years before his equally long tenure as Professor of Art / Painting.
Tom Dimond - Interview
Terry: How did you discover that you have art skills and what prompted you to follow art as a career?
Tom: From a very early age (7 or 8 yrs. old) I was intrigued by a special puzzle in the comic section of the Sunday paper. It involved reproducing a series of short lines by code into a grid with the end result being a fairly common image. Later as a young teenager I reproduced a photograph of a baseball player using the same technique and graphite pencils. It was truly an AH HA moment for me. I had always exchanged letters with a school friend of mine during the summer months and we would both decorate the envelope with trompe l'oeil images in the manner of MAD magazine. I was encouraged by my family to create drawings and I was fortunate to have art teachers all through elementary to high school. It seemed natural for me to pursue a career as an artist in some way after attending art school in Boston and Knoxville, Tennessee.
Terry: You have had a very specific process for developing your ideas for some years. Would you please talk about this process: how it developed, how it supports your ideas or perhaps how it ignites ideas? 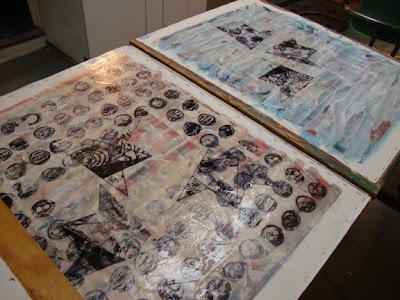 Work in progress.
Tom: I have always used the grid as a way of beginning a painting. Early on in art school in Boston my surroundings and other artists heavily influenced me. Boston was a city full of signage. One day while walking I came upon some workmen carrying a section of a large sign that was to be installed on top of a building in Copley Square. Taken out of context the image was very abstract and it gave me the idea of creating grids and filling them with sections of letters and abstract shapes in a non-legible manner. Through the years this idea became the seed for a long series of images based upon circles on a grid, with various complexities. 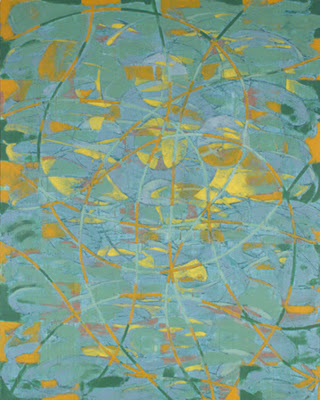 Naidon Laulu
Acrylic - 60" x 48"
Terry: How do you know when you are on the right path with a piece?
Tom: When I begin to discover something I have never encountered before within this very narrow construct of themes. Sometimes I will go for months pondering the next step and suddenly while doing something mundane a new twist will pop into my head and there I go. 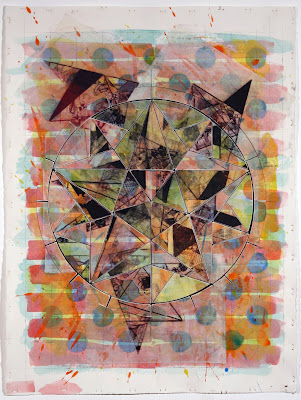 Reunion 2010 B
Mixed Media - 30" x 22"
Terry: What are you currently exploring in your work?
Tom: Some years ago while on a study tour of Italy with students I found myself in Venice staring at the most fantastic marble tile piece on the floor of the Cathedral of St. Mark by the Venetian artist, Paolo Uccello. At approximately the same time back in South Carolina, I happened upon a discarded car air freshener in the image of three cherries. Eventually I put the two items together in a series of watercolors (Trinity V2 at top of page). The merging of these two disparate items eventually led me to the work I am currently involved in. I am titling the series Reunion because the images that are being put together are coming from my past and present life experiences and are united together within the Uccello tile piece. 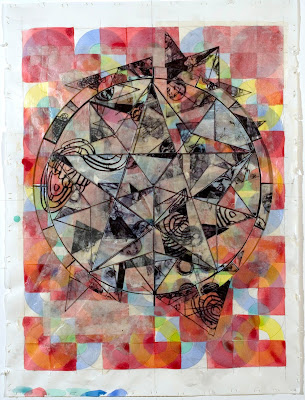 Reunion 2010 E
Mixed Media: 30" x 22"
Terry: What have you found to be the most interesting development in contemporary art during the last 20 years?
Tom: The last 20 years of the 20th century presented widespread acceptance of all media in any form or shape. Artists from all cultures and age groups began to be recognized globally. Mixed media and multiculturism opened up a lot of doors for all artists. It was no longer only painting and sculpture that dominated the art galleries and new forms of expression began to emerge. The blending of high art and low art allowed artists to explore and express new combinations of ideas and images. 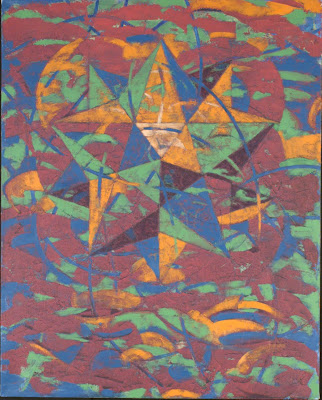 Ukkonen
Acrylic - 60" x 48"
Terry: When you look at other artists work, what attracts you? Give us the names of some of the artists you feel are making great work right now and what is it about their art that puts them in this category?
Tom: I have always been attracted to artists that have the same sensibilities as myself. Geometric Abstraction, Pattern Painting, color, texture, irregular shapes, surface tension are all elements that find my gaze. Early in my career Frank Stella, Ad Reinhardt, and Ros Barron were artists that I looked at because of the simplicity of shapes and use of color; later, Terence LaNoue, Ross Bleckner and Charles Seliger provided me with insight into the richness of texture and pattern in painting. 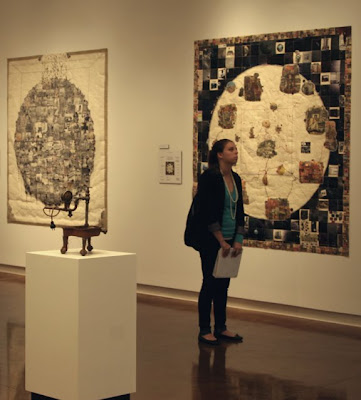 Aldwyth exhibition at College of Charleston, Charleston, SC
Of late, my interest in collage has been inspired by Kurt Schwitters, Aldwyth and most recently the work of Mark Bradford. Of course, there are many more artists who would fill the bill for me, but essentially, the ones I have mentioned continued to pursue their ideas and develop their work along certain personal guidelines within a structured set of ideals. This is basically what I have strived to do in my own studio activities. 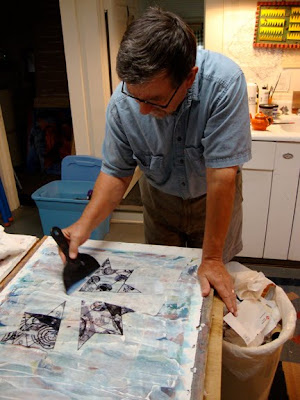 Tom working in the Studio.
To see more of Tom's work, visit: http://tomdimond.com
Thank you visiting Studio 24-7 and please come again!
Don't forget: Commenting is FREE!!!
Posted by Terry Jarrard-Dimond at 7:12 AM