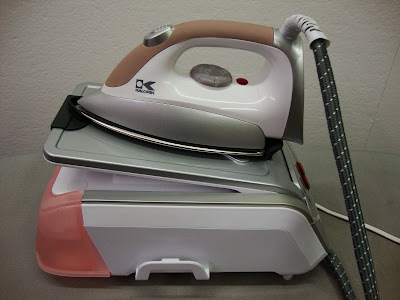 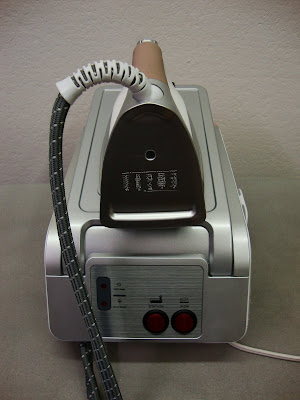 Just so you know, I'm not being paid to promote anything. I just want to share my experience.
The Rowenta has the reputation of being "the best". That has not been my experience. The first one I owned fell apart piece by piece until it wasn't safe to use and the second one burned up from the inside out! Both went into the trash. The $12 iron is doing it's job as I purchased it to iron out wax. It gets hot and does the job. If it dies it isn't a tragedy but it is not powerful enough to iron my hand dyed fabrics. 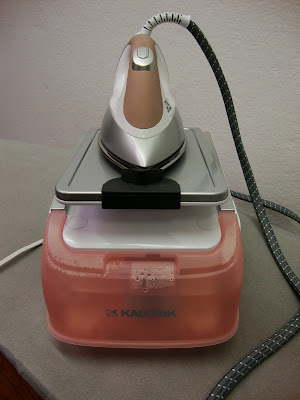 The Panasonic cordless iron has been good and I enjoyed not having to fool with the cord but the power/temperature button combination is one of those plastic deals that you press and it has become undependable.
I also have a non-steam iron that is at least 40 years old! It's great but I wanted a good steam iron. This summer one of my workshop students brought a steam iron system to class and she expressed how much she liked it. It was a Rowenta. I kept thinking about that iron and wrote my student and ask a few questions. She gave me lots of great information including a list of a few features she wished her iron had. As I researched the Rowenta I found that there was a model that had the features she listed but the price tag was more than I was willing to pay. 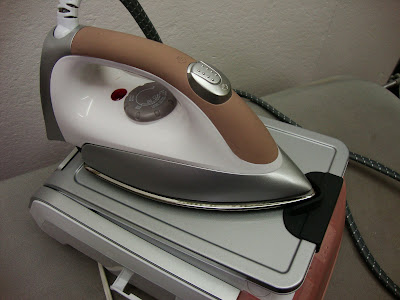 I began to research ironing systems and one day a cute, fat, PINK Kalorik iron showed up in the Google search. This was funny because just that week my sister has been telling me that Kalorik made pink kitchen appliances in the 1950's. In truth I was unaware that the brand was still around. 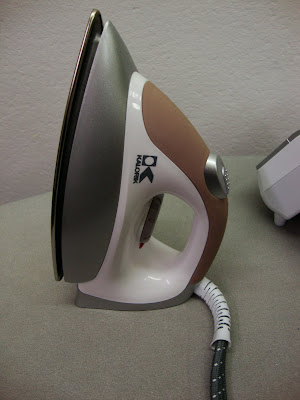 As I read the description of this ironing system I found that it had all the features my friend had mentioned and it costs less than the lower-end Rowenta. I decided to try it and so far I am very impressed. So what do I like:
It heats up very fast....like in 2 minutes from scratch.
The water tank can be refilled without waiting for the iron to cool down. When it gets low you can simply refill.
The water tank holds a lot of water.
The angle of the bed that the iron sits on can be adjusted.
You use tap water.
Lots of steam vents on iron.
The steam control is easy to use. It can be a shot of steam or continuous.
The electric cord and the steam hose are nice and long.
It's PINK!
I have heard a couple of people say they don't like using steam irons for fear of water spots. I have to say that this is the driest steam I have ever had from an iron. As long as you have it set at the correct temperature there isn't any dripping.
I have high hopes that this iron will have a nice long productive life. I ordered it from Sear's online but it is available from other places.
Thank you for spending time at Studio 24-7. I love hearing from you and Remember:
Commenting is FREE!!!
HAPPY IRONING 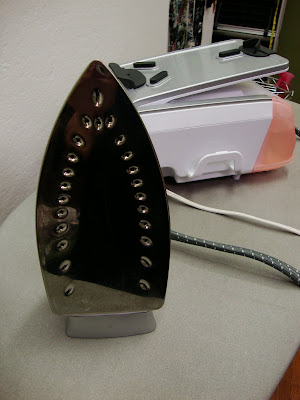 Posted by Terry Jarrard-Dimond at 7:00 AM

Email ThisBlogThis!Share to TwitterShare to FacebookShare to Pinterest
Labels: equipment