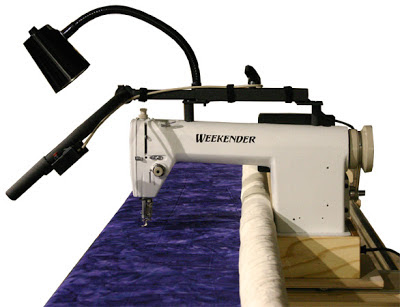 Almost as soon as I learned about sewing machine frames and quilting machines I began researching and ultimately bought a small machine called a Weekender made by  Hinterberg.  I chose this machine because I thought it would do the required work AND it was the only one I could afford.  That was around 2007.

I have continued to use this small setup with  no problems.  This past week I was within inches of completing a new piece when I began to have a big issue with breaking thread and after checking all the things that usually cause thread to break I called the customer service at Hinterberg.  Imagine my surprise when I found out that Hinterberg has been bought out by Nolting and the Hinterberg line of quilting machines is no longer beinf manufactured.  I do believe Nolting is still making the quilting frames Hinterberg is known for.  Nolting is providing limited assistance to owners of Hinterberg's machines.  As to my thread breaking issue the technician simply suggested I continue checking the usual things for breaking thread. While doing that I found an even more disturbing issue. 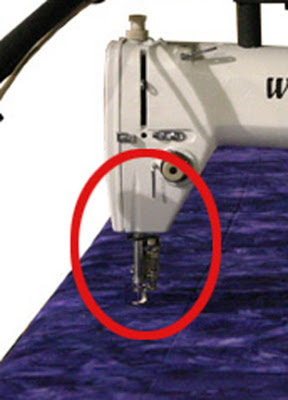 If you look carefully at the above detail of this machine you can see the gradated dip in the front of the machine which guides the thread down to the hooks above the needle.  Notice this dip does not have a metal shield or plate but is covered in the same "powder coating" that is on the entire machine body.  Bad decision Mr. or Ms. Designer.  That coating is evidently very soft and on the edge where the thread goes into the thread guides on the needle shaft, there were dozens of cuts.  The edge looked like the teeth of a comb.  This is a example of someone saving a tiny portion of a penny by not covering that edge with metal and creating a problem for many people who bought this machine.

The technician assured me these cuts would not cause my thread to break (really???) but I have a hard time believing that.  He also told me that he had heard this complaint from numerous other Hinterberg machine owners.  I decided I needed to try and put something over these teeth that would allow the thread to run smoothly down to the needle.  Prepare yourself for some authentic home repair. 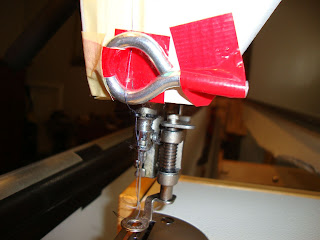 The picture may be difficult to understand but if you look closely you can see a strand of thread against the red duck tape.  The thread comes down the face of the machine, under the screw eye then through and over the bottom of the screw eye.  It then makes a nice soft turn over the edge of the screw thus avoiding the damaged part of the edge and into the guides which feeds it to the needle.  My repair isn't pretty but it works.  I've decided not to use glue but leave the tape to test this over time.

Just for fun I looked online to see what the current prices are for quilting machines and I can promise you I won't be buying one.  The machines are fabulous but the prices are out of site.  Think "the price of a modest car".  So while I'm sorry about the powder coating and small size of my machine, it's still the only one I'm likely to ever own. I will continue to figure out how to get the most out of this little machine.

I would like to mention that the larger size of this machine, the Voyager, is still being sold by Nolting.  These machines are refurbished and I believe they were a modest $2,400 which is a very modest price when compared to other equipment of that size.  Despite the issue I described in this article, I do recommend these machines as strong sewing and dependable.  As long as Nolting is providing a warranty which includes advice and service.  I'm guessing they are accepting Voyagers as trade-ins when customers buy one of their new quilting machines.

One more thought....when I first researched quilting machines there were several being manufactured by small privately owned businesses rather than large companies.  They were not as "polished" looking but they were less expensive.  I wonder if any of those folks are still around.

Thanks for spending time at Studio 24-7.
I love hearing from you and
Remember: