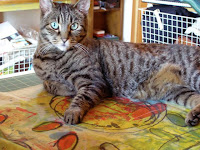 Wow! Stage Six. We are moving right along and elements of the work are beginning to shift around. Leslie Bixel has given us a through report on her thinking process and how she has contributed to the work. If you didn't see the new Video or the CC Grid from this past weekend, please visit the previous post. I will be updating both of those as the weeks pass. Leslie has a lot to say so let's get going.

Leslie's Observations on the Project

So we are now officially in the messy middle of our conversation. And it does seem very different than what I had expected. I can't just drop a colorful bon mot and expect to move the conversation along. I need to acknowledge the other voices in the room and respond with something appropriate. I feel pressure to resolve the piece even though we just started getting into the meat of the conversation.

Because aesthetic choice is so personal, I realize that someone else's compositional choices may not be the same as mine. I therefore want to be very careful to evaluate the composition I receive on formal elements, and look for areas of potential adjustment or enhancement. I also understand that as artist number 5 of 14, I'm not likely to resolve everything, maybe not anything. So instead, I want to take the opportunity to move the piece along and keep the conversation flowing.

I opened up the package on Wednesday morning. Wow, a total re-design!!! A bit disorienting. I need to get re-acquainted with the piece. Which way is up? Interesting addition of some sienna colored bits to move the eye around. What happened to the first figure? Oh there it is. Now it's a spark plug. Fun. I like the sense of spontaneity and whimsy. But I'm not sure what to tackle first. The piece feels "finished", so in order to contribute, I will likely need to deconstruct something. What will it be? 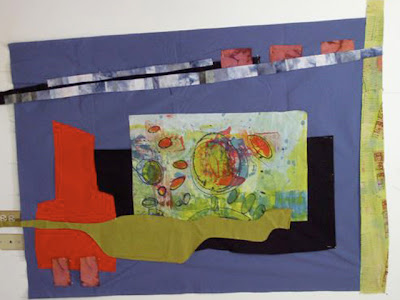 Still undecided about the orientation, I hung it on my design wall horizontally, in order to have a clear view for considering compositional elements from the other side of the room.

The large yellow rectangle of complex cloth, while beautiful, is very bossy. I feel the need to cut it up, and use its power in a more subtle and controlled way.

I sent a message to the group asking if it would be OK to cut stuff up. They said yes.

Itching to make my mark on the piece, I dove directly into my stash, and started auditioning colors for new figures. I always start with color. To me color is central to any work of art I make, and since color is often the focus of my work, I had assumed this is where I could safely contribute to the piece.

If I couldn't cut down the complex cloth, maybe I could balance it with some acid greens. 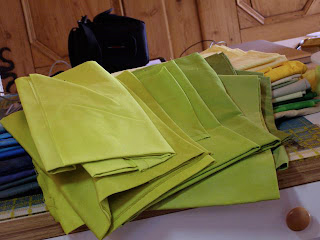 Maybe a figure in a plumy purple, or an ocean blue? 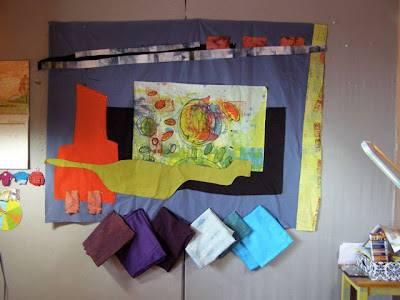 I left it on the design wall for 3 days until I could make time to work again in the studio. Which means I had a lot of time to think about the piece before diving in.

The art class in my head

As I went about meeting other commitments over those three days, I thought about this piece frequently. I even dreamed about it. As time passed, more and more details of the piece revealed themselves to me. It was frustrating not being able to get to the studio, but I was getting something out of reflecting on the work pinned to my design wall. Sitting at my office desk one afternoon, I wrote up a very analytical mini-critique to the compositional elements of the piece.

Color Palette:
From a strictly formal viewpoint, the palette of this piece has yet to be defined, and currently lacks an internal logic, with warm and cool, and multiple values in competition within the space. The red is an extremely strong element, as is the acid yellow, and both want to come forward as figures above everything else.

The line work is a mix of both linear and curved. Still roughing in, the current state of line work lacks a unified sensibility or dominant gesture. The large rectangular fabrics do not have distinctly defined shapes, and do not seem to have been cut with intention.

Figure/Ground:
This new composition has a couple of islands. Not clear that the grey pieced element can stand on its own as a figure. Things are floating, not connected, and there is no repeated shape other than rectangles. The ground is still a single color and does not contribute to defining the space, nor is the current composition create a strong sense of layers or depth.

The current composition reads as two figures. The central figure dominates the composition from the middle, the secondary figure wants to pull you to the edge of the piece, but is not strong enough to do so. The strong yellow element at the very edge unexpectedly disappears, and has the effect of making the mouse grey background more square.

Balance:
The current composition is balanced so that it reads from most orientations fairly equally, possibly leaning towards a portrait (vertical) orientation.

Rhythm:
The only repeated elements, the small sienna rectangles move the eye around the piece. The two yellow fabrics play off each other.

After thinking about all the design elements of the piece for several days, I decided my objective would be to create a stable ground that allows figures to float above and interact with each other in a jazzy sort of Stuart Davis way.

Studio Day 1:
Structuring the ground
I took off the big yellow fabric to get a good look at the other elements. 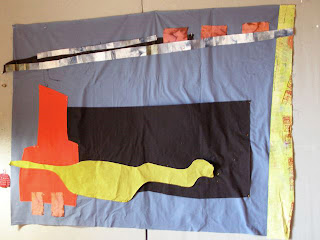 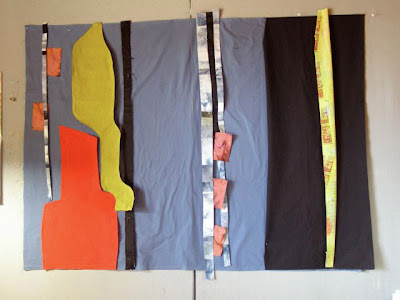 I restored a design passage I really loved in a previous composition by using the big red element in relation ship to the ocher amoeba-like element to add yet another vertical component.


Time to play with color
So now I had some structure. Time to work on color. In order to push the background even further to the cool side, I decided i wanted to add blue elements to the space. I had another reason for choosing blue. I wanted to include something that both speaks to the environment where I live looking out at the Pacific ocean, and that could contribute a spiritual element of calm comfort in the design. 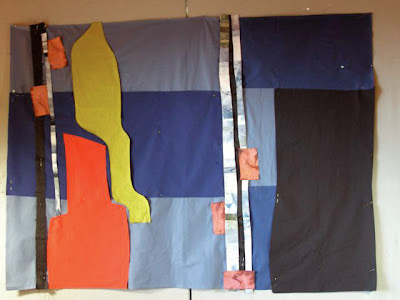 I used two shades of solid blue fabric and the existing black element to color block the space. After I roughed it in, I carefully cut the shapes to the blocks (blue and black) with focus on the line work at the edges of the shapes. I got the right hand side of the piece looking OK to my eye, but the line work on the blue element to the left felt too hard and straight.

I decided to sleep on it and see if I could do better in the morning.

At first glance, I realize I have been letting the urge to resolve things influence me. My goal was to provide structure and support to the artists ahead of me in the project. So, rather than perfecting the blue shape on the left, I decide to remove the element entirely.

Now the piece feels wide open and unfinished again, and I feel pleased about making room for others. I see about 10 things I want to change, but again push aside the pressure to resolve, and resist and changes that require a sharp blade or scissors.

I feel like I have moved the piece forward and achieved my objective of stabilizing the background by unifying the color palette with cool tones, creating rhythm and structure across the space with the use of vertically placed linear elements, and defining distinct spaces through the use of color blocking on the right side of the piece. 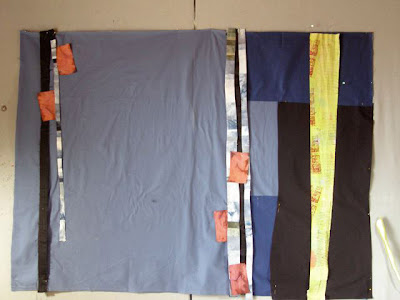 Time to play with figure placement

The Red & Ochre figures now appear quite static marching along with the vertical elements of the background. 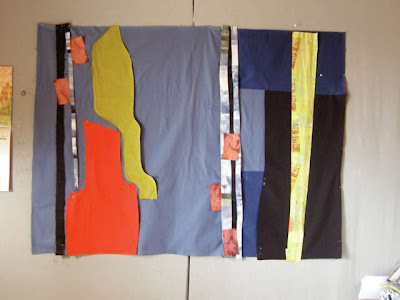 I decide to place them oriented horizontally by rotating them 90 degrees. Ahhhhh. Much better. 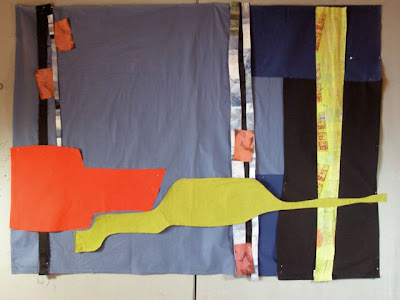 Meanwhile, I have thought about the shapes I would like to see added as figures. I knew I would cut into the complex cloth I had put aside if I was going to get it to work without overpowering the composition. I wanted curved, organic shapes with a gesture capturing the human arm's motion. I used a chalk marker to draw a sweeping curve, and a boomerang.

I played with positioning the curved shape , first on the left, then on the right. 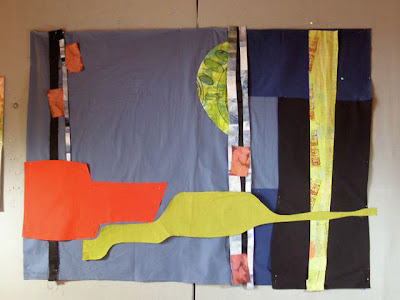 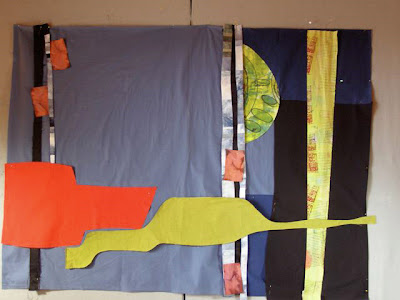 I responded to the way the curve interacted with the line created by the color fields.

Finally, I added my boomerang in relation to the two strong figures on the right of the composition. I placed it to echo the curve on the left, to build a bridge across the vertical element.

Happy at this added bit of whimsy, I pinned everything in place.

Here is my "final" composition. Intentionally unresolved and open to more input, but also speaking to my own compositional sense of rhythm, proportion, balance & gesture. 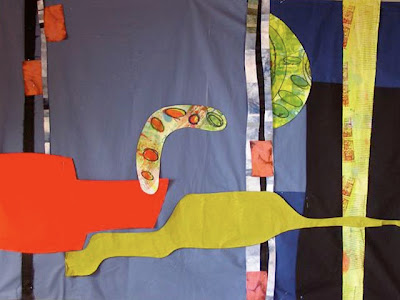 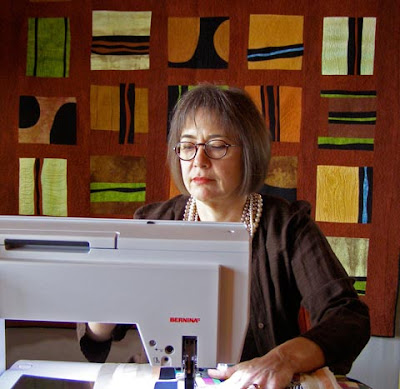 
About 10 years ago I made a switch from oil painting to quilting. Since then I have been exploring various fiber techniques, mastering the craft of sewing, building a body of work, and searching for my own voice. Color is my emotional touchstone and is a consistent theme across all my artwork, regardless of media. In recent years I have created several color experiments using commercial printed fabrics, ordered by the gridded structure of traditional quilts. My sense of composition has been greatly enhanced by studying under Nancy Crow, and she has inspired me to move forward with more abstract and contemoporary work. In 2007 I began dying all my own fabrics. Currently I am involved in a series of pieces that reflect the organic forms and subtle colors of the pristine redwood forest surrounding my Northern California home. 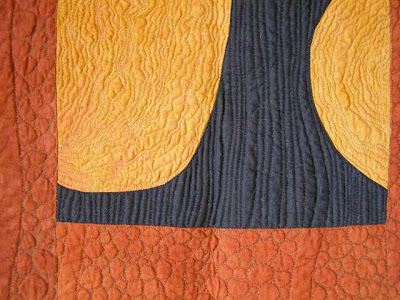 To read more about Leslie's life and work as an artist please visit her blog: O-I-Quilt.